You are here: Home › Mystery › New to the VAE Library: 221B Baker Street: The Master Detective Game

Hit a good find today while I was out thrift shopping: a complete version of 221B Baker Street: The Master Detective Game.  For $4 (!). 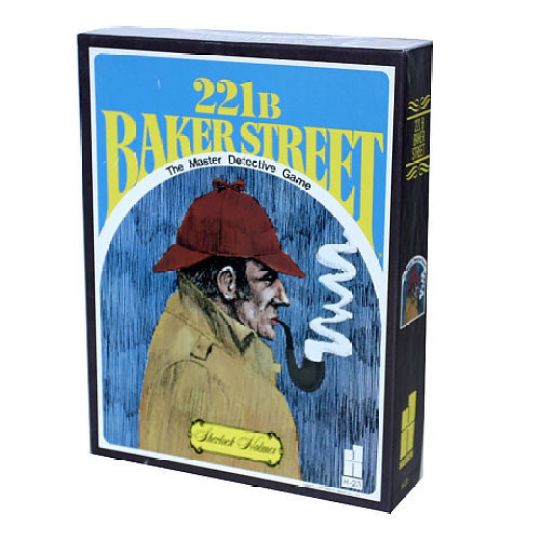 This game has been in print since 1974, and well… wikipedia has all of the details: https://en.wikipedia.org/wiki/221B_Baker_Street_%28board_game%29 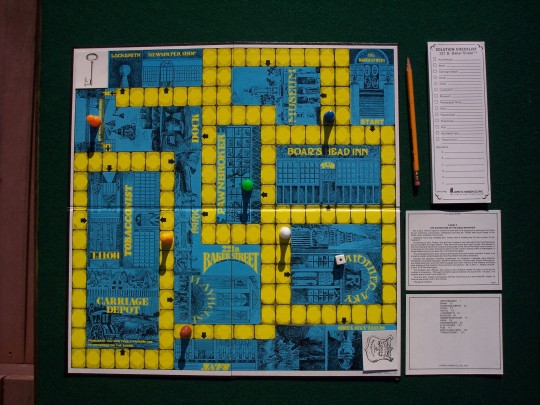 “221B Baker Street: The Master Detective Game is a board game featuring Arthur Conan Doyle‘s fictional detective Sherlock Holmes and developed by Jay Moriarty (dba Antler Productions) in 1975[1] and sold by the John N. Hansen Co. in the US since 1977. The players have to solve cases using the clues provided by visiting locations on the board such as 221B Baker Street, Scotland Yard, Apothecary and Pawn Broker. The original game has twenty cases, but there are ten sets of 20 cases each for a total of 200 Cases available for play. The game has been licensed for sale in the UK (Gibsons Games), Canada, Australia and New Zealand.

Before the game starts, a case is selected, and one player reads the case file. This fills in the players on the background of the case as well as listing the location of each clue in the case booklet. A place may provide no clue, or only a part of one. Clues may also be entirely irrelevant, or throw a player off entirely. Clues often are in the form of a riddle, especially multi-part clues.

Play begins with each player at 221B Baker Street, from which the players visit each of the 14 locations on the board. Movement is decided by the throw of a single die.

Upon entering a location the player may read the back of the card containing the case. This consists of a list of locations and a number assigned to each one. The player may then secretly read the relevant paragraph in the back of the rulebook which is the clue. (The numbers are mixed up so two adjacent numbers in the book are unlikely to be from the same case.)

Each paragraph may or may not contain evidence of note and the clue may be cryptic. A time limit to read the clue is recommended after which the book must be closed and play passed to the next player. If a person wishes more time (or needs to check again) then he must stay for an extra move (or return to the location if previously vacated) to get another attempt. Allowing some players (e.g. children playing) more time than others is not unknown.

If the player believes that they know the solution to the case, they may return to the starting point. Upon returning to the starting point the player must announce (publicly) the essentials of the crime: typically the culprit, the weapon used and the motive. Some cases (scenarios) may require other items to be revealed – e.g. culprit, motive, location of stolen items. This is outlined in the case introduction. Having read aloud their solution, they inspect the rulebook and look up the entry given for the correct solution. If correct they must read it aloud to confirm. If not they stay silent except to announce their failure and are excluded from the game. It is possible for all players to be excluded.

Three additional ‘twists’ (or tactics) are available. The Carriage Depot (one of the locations) can also be used to move immediately to any point on the board, in which case they cannot view the clue although they may view the clue, then wait for their next turn before taking a carriage. Also, each player begins the game with two markers, one is a key and the other a warrant. Upon leaving a location the player may use their warrant to bar access to all other players who must expend their own key card to remove it. Only one of each card may be held by a player at one time, although replacements may be gained by visiting Scotland Yard or the Locksmith’s (both locations with clues). 221B, Scotland Yard and the Locksmith’s may not themselves be sealed with a warrant. A warrant can be used to obstruct other players to locations with helpful clues or placed in locations with useless clues to convince other players such a location is useful.

The two locations with multiple entrance/exit positions can be used to gain a short-cut. The player must stop upon entering (viewing the clue or not) but can leave one turn later. In the case of a ‘race to the end’ (two players making all speed to reach 221B first to announce their solution) this is invaluable in the case of the Park as it occupies a whole stretch of the board and one end is directly adjacent to 221B. With average die rolls it would take 6 moves to move the whole length of the park by normal means rather than the two used by moving through it. The carriage depot (should it be closer) is also invaluable in this ‘race to the end’ situation.

Many novice players begin at 221B and then progress across the board. Another tactic is to move to the Park (directly adjacent to 221B), read the clue and then move (due to the large size of the park location) to the carriage depot. Upon reading the clue at the depot, take a carriage to the docks (the furthest point from 221B) or a nearby location to the docks. In that way the player works ‘backwards’ across the board (back towards 221B rather than away from it), and so after gaining many clues will be closer to 221B than a player who worked from 221B outwards (and so might be the opposite side of the board – and hence the furthest distance from the ‘end’ at 221B when enough clues are read to provide the solution.)

9 expansion sets with additional cases were published, numbered from 2 to 10. The board game 221 B Baker Street was created and copyrighted by American writer Jay Moriarty (dba Antler Productions) in 1975.”