check it out here: 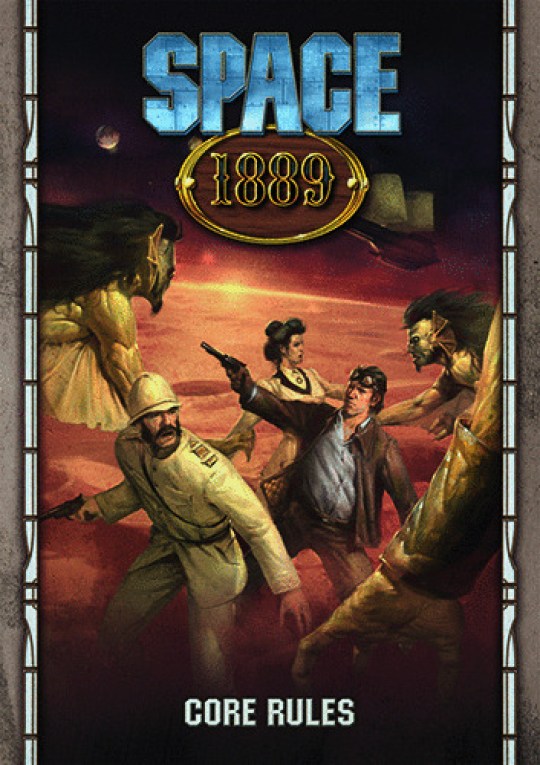 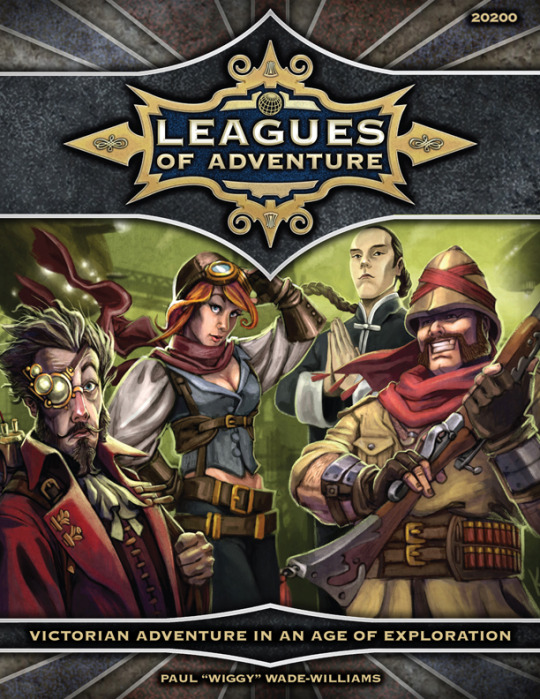 I remember the first time I saw the original GDW Space: 1889 in The Compleat Strategist near Rittenhouse Square– I was living in Philadelphia and the main games our group was playing were either superheroes (DC Heroes by Mayfair), or espionage games (using James Bond: 007) and cyberpunk Cyberpunk (by R. Talsorian.) The look of the game was intriguing enough, with the great David Dietrick art — one of the big boys in game cover art at the time — and a quick look through the interior was enough to get me hooked. There was a board game, Sky Galleon of Mars, that tied in and allowed you to make the jump from the RPG to a wargame and back, and there were about a dozen supplements and adventure books published before GDW died. If have the book I bought a quarter century ago sitting in front of me as I write this.

After a bit of stumbling to put together a game, I wound up running some form of Victorian science-fiction — usually in the Space: 1889 universe — from 1990 until 2004, when I started to drift toward ’30s pulp and Exile’s Hollow Earth Expedition. The game was one of the reasons I went into history, my specialty was Early modern and Modern Europe until my doctorate (mostly due to the shoddy condition of the European section of the college) when I drifted into Modern US (which strangely coincided with my most to Hollow Earth Expedition.)

A few years ago, there was a Savage Worlds version of this, the original “steampunk” (gahd, how I hate that word!) game, and I have a PDF of that, as well, but never found SW made much sense, mechanically. Close to that time, it was announced that Clockwork in Germany was doing a version using Ubiquity — the rules set from Hollow Earth Expedition. In 2013, the Kickstarter for an English-language version was posted by Angus Abramson — who I worked for in the early days of Cubicle 7 on the Victoriana line — and his new Chronicle City house. I missed the Kickstart for this, having already blown dough on the Revelations of Mars book by Exile a month earlier (still not @#$%ing close to done…) Well, the PDF just dropped for sale yesterday with the print book not far behind, and I had a chance to do a quick read-through this afternoon.

The new book is very true to the original. There’s some difference in the verbiage and the arrangement of the book, but the setting is unchanged.  There is new artwork, some of which is an update of pieces in the original book, some of which is original. The quality is true to the original book, as well — mostly black and white pieces and the occasional color plate. The maps of Mars and Venus are updated and look better than the original, but when I looked at them side-by-side, they are “the same.” There is the alternate history from the original book — Edison’s flight in an airship with ether propeller to Mars, and the other alternate history moments. There’s a gazette for Earth, Mars, Venus, and Mercury. Here and there, you can see where the new publishers added bits and bobs to flesh out the worlds — new gadgets and gear, a few locations and “worlds in the ether”, etc.

Character generation is nearly the same as you would find in Hollow Earth Expedition, but there is a specific set of rules for older, more experienced characters that looks a lot like the character creation house rules we’ve been using for our HEX games. There are a few traits and flaws that are setting specific, the Status Resource is very slightly more fleshed out, but otherwise it’s the character generation from HEX. One of the things that I noticed was there were no real traits that differentiated the Martians from the human characters in the game. I would have expected something to take into account the acclimation to lower gravity and pressure, but Space: 1889 also has a much more friendly Mars than reality — heavier gravity and atmosphere than most alternate Mars settings. (Over a few campaigns, I started using a Mars with .5G, rather than the .9G of this game, and lower pressures, making mountain travel dangerous for Earthlings.)

Rules-wise, it’s Ubiquity: roll the number of dice (any even sided will do — even a coin) equal to your skill plus the connected attribute and beat the number of successes. It has the “take the average” than makes Hollow Earth Expedition work so well when fighting mooks and the like — the GM doesn’t have to do a lot of rolling and the action moves quickly; characters that just need a pass/fail result can take the average when they know it’s higher than the needed successes for the same reason — getting roll playing out of the way of role playing. If you know HEX, you can pick up and play this.

Style: The original game was pretty sharp for it’s time, with good color art and crappy line art for the rest; the new version is average RPG quality art for the black and white art, decent color. I’d go 3-3 1/2 out of 5. Substance: Unless you plan on really digging into political intrigue and the like, the book is good enough to launch into a campaign that night, and the rules are complete enough to handle mot situations. 4 out of 5. Is it worth the $56US for the print and pdf combo? If you are into this genre, yes; if you are an old Space:1889 fan that wants a better set of mechanics than the execrable ones from 1989, absolutely; if you’re just curious..? No.

So, let me stack this up against the closest thing to it’s peer — Leagues of Adventure, also a Ubiquity-powered game set in a Victorian science-fiction alternate universe. This one is published by Triple Ace Games. Again — the mechanics, character creation, etc. is no different from Space: 1889 or Hollow Earth Expedition, but there are a few places where leagues of Adventure excels: in the character creation section, there is a great bit on the Rank Resource, and how it ties to the various real and invented clubs of the period. Being a member of a club was almost essential for the well-heeled gentleman, and certainly for the aristocrat. Like Space: 1889, the Status Resources is pretty sketchily defined, but at least Space:1889 makes room for people below the rank of peer or wealthy middle class (bravo!) Also, Leagues provides rules for Inventions — something Space: 1889 (like the original) glosses over. Characters as inventors seem to be an afterthought in Space: 1889, but there’s a nice set of rules for it in Leagues and a goodly selection of weird steam- and clockwork-powered science!

Style: 4 out of 5 — the Art is superior RPG quality, full color, and the layout is nicely done. Substance: There’s a lot on the society and the basics of the Victorian period, and the rules are more comprehensive than Hollow Earth Expedition was… 4 out of 5. Is it worth the price of $30 US for the book? Absolutely. Is it worth the $18 for the PDF — no. Buy the book.

Now, here’s my suggestion: I would be surprised if Clockwork and Chronicle City didn’t do some kind of reprint or series of splatbooks for Space:1889, and TAG already has one book out and another with weird inventions on the way…if you’re a Space; 1889 or Victorian speculative fiction RPG fan — buy them both and mix and match the bits and bobs you need to build up your setting. (It’s what I’m doing.)