You are here: Home › Characters › Burke and Hare

Up the close and doun the stair,

But and ben wi’ Burke and Hare.

Burke’s the butcher, Hare’s the thief,

Knox the boy that buys the beef.

A pair of the most notorious criminals of the 1800s… 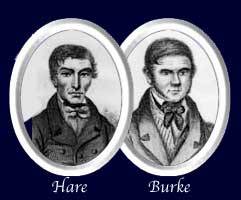 “The Burke and Hare murders… were a series of murders committed in Edinburgh, Scotland, over a period of about ten months in 1828. The killings were attributed to Irish immigrants William Burke and William Hare, who sold the corpses of their 16 victims to Doctor Robert Knox as dissection material for his well-attended anatomy lectures. Burke and Hare’s alleged accomplices were Burke’s mistress, Helen McDougal, and Hare’s wife, Margaret Laird.”

“Before 1832, there were insufficient cadavers legitimately available for the study and teaching of anatomy in Britain’s medical schools. As medical science began to flourish in the early nineteenth century, the demand for cadavers rose sharply, but at the same time the legal supply failed to keep pace. One of the main sources—the bodies of executed criminals—had begun to dry up owing to a reduction in the number of executions being carried out in the early nineteenth century. The situation of too few corpses being available to doctors for demonstrating anatomical dissection to growing numbers of students attracted criminal elements willing to obtain specimens by any means. As at similar institutions, doctors teaching at the Edinburgh Medical School, which was universally renowned for medical sciences, relied increasingly on body-snatchers for a steady supply of “anatomical subjects”. The activities of these so-called “resurrectionists” gave rise to particular public fear and revulsion,[4] but, such were the financial inducements, the illegal trade continued to grow. It was a short step from grave-robbing to anatomy murder.” 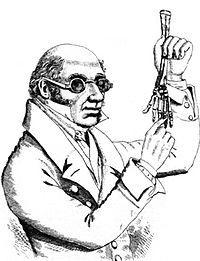 “According to Hare’s later testimony, the first body they sold was that of a tenant, an old army pensioner who died of natural causes on 29 November 1827. He had died owing Hare £4 rent, so to recoup the loss they substituted the body by filling the coffin with bark and took the cadaver to Edinburgh University, looking for a purchaser. According to Burke’s later testimony, they asked for directions to Professor Monro, but a student directed them instead to Surgeon’s Square where they sold the body for £7.10s to an assistant of Dr. Robert Knox,[8] an anatomist of considerable reputation owing to his knowledge and skill gained as an army surgeon at the time of Waterloo.“ 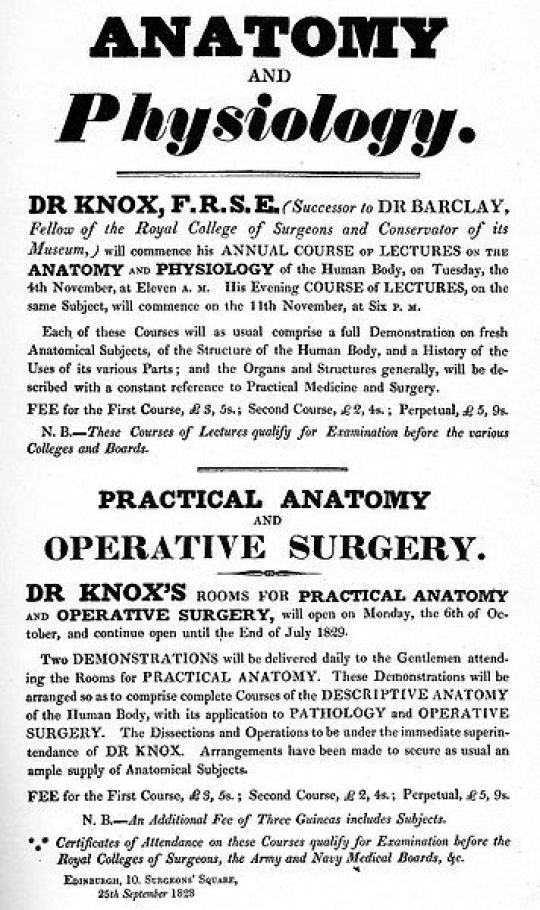 “Knox was an extramural lecturer who, as was customary at the time, charged fees to medical students and visitors attending his lectures on anatomy. His advertising promised “a full Demonstration on Anatomical Subjects” as part of every course of lectures he delivered, and he boasted that his lectures drew a class of above 400 pupils.”

“Burke and Hare’s first murder victim was a sick tenant named Joseph, a miller by trade, whom they plied with whisky and then suffocated. When there were no other sickly tenants, they decided to lure a victim from the street. In February 1828, they invited pensioner Abigail Simpson to spend the night before her return home to the village of Gilmerton. The following morning they employed the same modus operandi, serving her with alcohol to intoxicate her, and then smothering her. This time they placed the body in a tea-chest and handed it over to a porter sent to meet them “at the back of the Castle“. They were paid £10.” 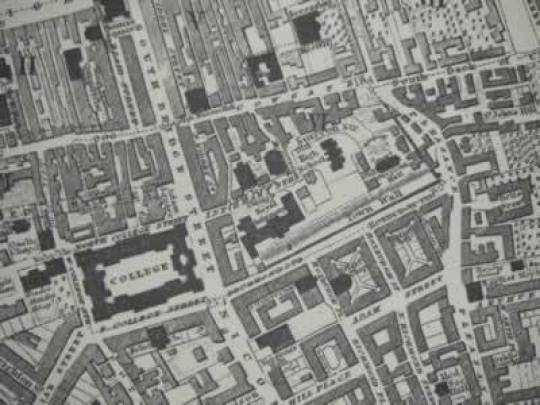 Edinburgh University and the medical district

“Two further undated murders took place that Spring. One victim was invited into the house by Mrs Hare and plied with drink until Hare’s arrival; the other was despatched in similar circumstances by Burke acting on his own. Next, Burke encountered two women, Mary Paterson and Janet Brown, in the part of Edinburgh known as the Canongate. He invited them to breakfast at his brother’s house in Gibb’s Close, but Brown left when an argument broke out between McDougal and Burke. When she returned, she was told that Paterson had left with Burke; in fact, she, too, had been taken to Dr. Knox’s rooms in a tea-chest… The story later arose that one of Knox’s students had recognized the dead Paterson, whose acquaintance he had made a few days earlier.” 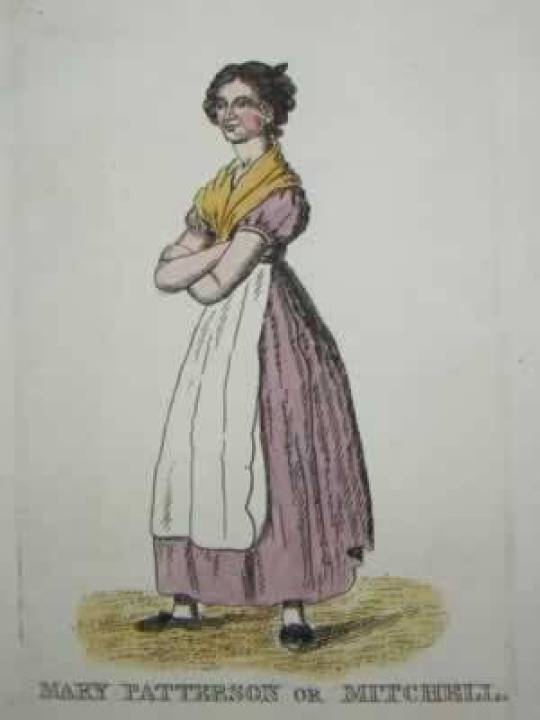 “One victim was an acquaintance of Burke, a woman called Effie who scavenged for a living and was in the habit of selling him scraps of leather she found which he could use for his cobbling. They were paid £10 for her body. Then Burke “saved” an inebriated woman from being held by a policeman and his assisting neighbour by claiming that he knew her and could take her back to her lodging. He delivered her body to the medical school just hours later. The next two victims were an old woman and her mute son or grandson, aged about 12. While the woman died from an overdose on painkillers, Hare took the young boy and stretched him over his knee, then proceeded to break his back. He later said that this was the murder that disturbed him the most, as he was haunted by his recollection of the boy’s expression. The customary tea-chest being found inadequate, both bodies were forced into a herring barrel and conveyed to Surgeons’ Square, where they fetched £8 each. According to Burke, the barrel was loaded onto a cart which Hare’s horse refused to pull uphill from the Cowgate, so that Hare had to call a porter to help him drag it the rest of the way on a sled. Once back in Tanner’s Close, Hare took his anger out on the horse by shooting it dead in the yard.“ 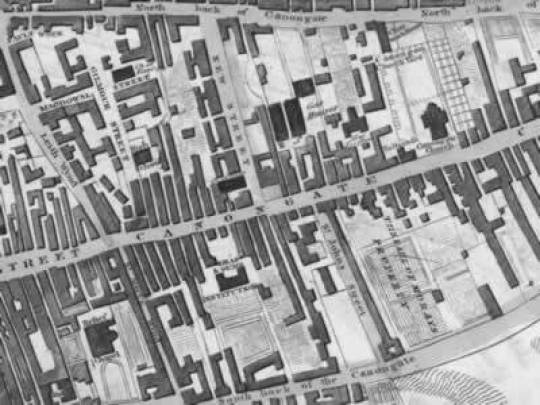 “Two more victims were Burke’s acquaintance, Mrs. Hostler, and one of McDougal’s relatives, Ann Dougal, a cousin from Falkirk. Burke later claimed that about this time Mrs Hare suggested converting Helen McDougal into merchandise on the grounds that “they could not trust her, as she was a Scotch woman“; but he refused.” 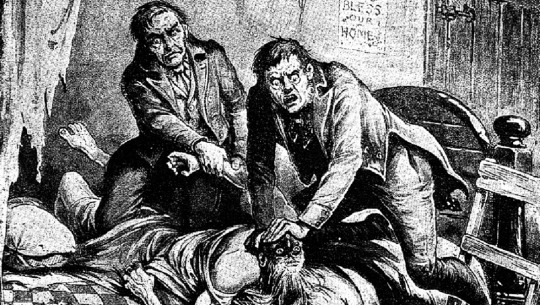 “Another victim was Mary Haldane, a former lodger who, down on her luck, asked to sleep in Hare’s stable. Burke and Hare also murdered her daughter Peggy Haldane when she called a few days later to inquire after her mother’s whereabouts.”

“Burke and Hare’s next victim was a familiar figure in the streets of Edinburgh, a mentally disabled young man with a limp, named James Wilson. “Daft Jamie”, as he was known locally, was 18 at the time of his murder. The boy resisted, and the pair had to kill him together, though later each blamed the other for taking the main part in the crime. His mother began searching and asking for him. When Dr. Knox uncovered the body the next morning, several students recognized Jamie. Knox denied that it was the missing boy, and was reported to have dissected the body ahead of others to render the remains unrecognizable. While Hare was in the habit of disposing of victims’ clothing in the Union Canal, Burke passed Jamie’s clothes to his nephews, leaving behind material evidence which was recovered before the trial.” 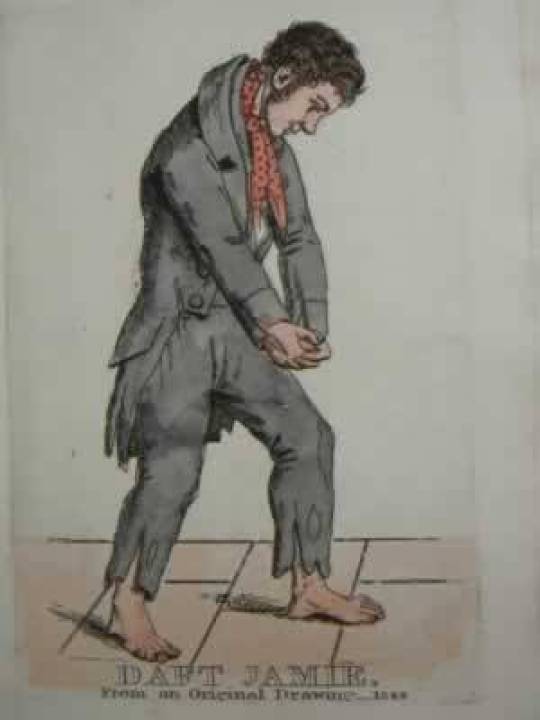 “The last victim was Mrs Mary Docherty… Burke lured her into the lodging house by claiming that his mother was also a Docherty, but he had to wait to complete his murderous task because of the presence of lodgers… neighbours later reported having heard the sounds of a struggle and even a woman’s voice crying “murder!”.” 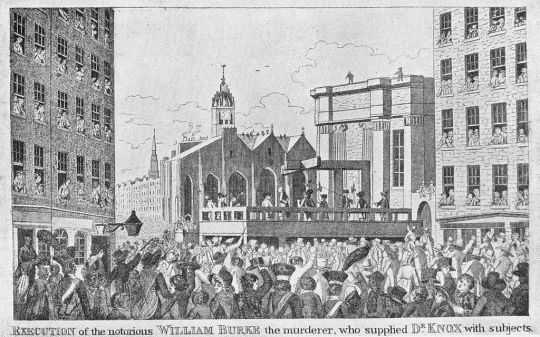 “The next day the Grays returned, and Ann Gray became suspicious when Burke would not let her approach a bed where she had left her stockings. When they were left alone in the house in the early evening, the Grays checked the bed and found Docherty’s body under it. On their way to alert the police, they ran into McDougal who tried to bribe them with an offer of £10 a week. They refused.

Burke and Hare had removed the body from the house before the police arrived. However, under questioning, Burke claimed that Docherty had left at 7 a.m., while McDougal claimed that she had left in the evening. The police arrested them. An anonymous tip-off led them to Knox’s dissecting-rooms where they found Docherty’s body, which James Gray identified. William and Margaret Hare were arrested soon thereafter. The murder spree had lasted almost ten months.

When an Edinburgh paper reported the disappearances on 6 November 1828, Janet Brown went to the police and identified her friend Mary Paterson’s clothing.”

“The evidence against the pair was far from conclusive. In the one case for which the authorities had a body (Mrs Docherty’s) the medical experts could not state the cause of death with any certainty, and the prospect seemed real that Burke and Hare would blame each other for the murders, leaving a jury uncertain as to whom to convict for a capital offence. Lord Advocate Sir William Rae therefore offered Hare the opportunity “to turn King’s evidence”, i.e. be granted immunity from prosecution if he confessed and agreed to testify against Burke. Contemporary accounts suggest that Burke was perceived as the more intelligent of the two, and was therefore presumed to have taken the lead in their crimes.”

“Burke and McDougal faced three charges of murder in respect of Mary Paterson, James Wilson and Mrs Docherty (the third charge to be heard first and, on a successful capital conviction, the other two to remain unheard). The trial took place on Christmas Eve 1828 and lasted twenty-four hours.”

“The jury retired to consider its verdict at 8.30am on Christmas Morning and returned fifty minutes later to find Burke guilty of the third charge and the charge against McDougal not proven.”

On the following day Burke was publicly dissected in the anatomy theatre of the University’s Old College.

Police had to be called when large numbers of students gathered demanding access to the lecture for which a limited number of tickets had been issued. A minor riot ensued and calm was restored only after one of the university professors decided to allow the would-be gatecrashers to pass through the theatre in batches of fifty at a time.

During the dissection, which lasted for two hours, Professor Alexander Monro dipped his quill pen into Burke’s blood and wrote:

“This is written with the blood of Wm Burke, who was hanged at Edinburgh on 28th Jan. 1829 for the Murder of Mrs. Campbell or Docherty. The blood was taken from his head on the 1st of Feb. 1829.” 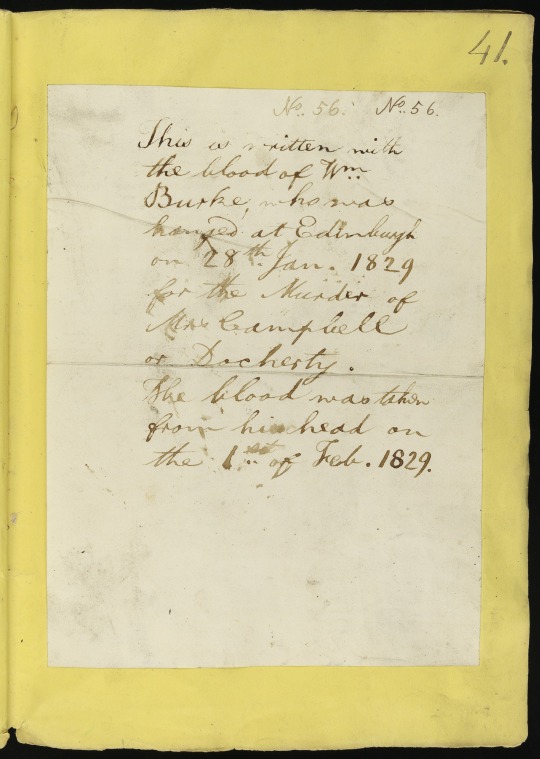 “Burke’s skeleton is now displayed in the Anatomy Museum of the Edinburgh Medical School. His death mask and a book said to be made from his tanned skin can be seen at Surgeons’ Hall Museum. … Following the execution and dissection wallets supposedly made from Burke’s skin were offered for sale on the streets of Edinburgh.” 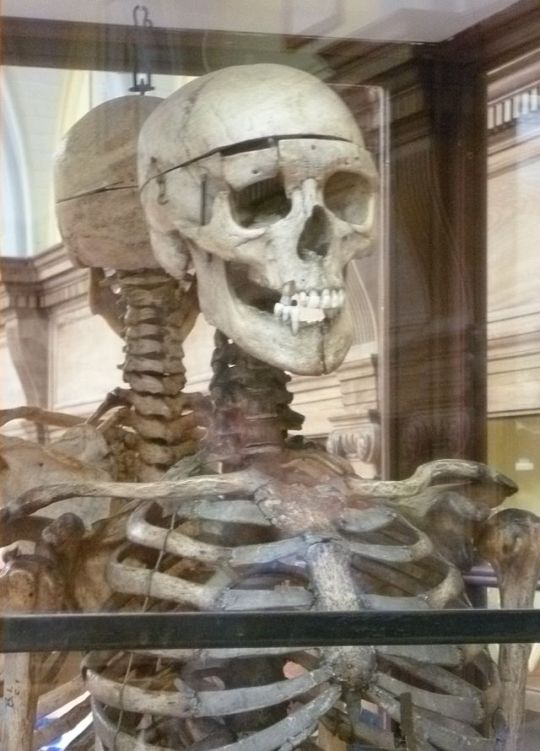 The preserved skeleton of William Burke

“Many popular tales about Hare circulated in the years after the trial. One such told of him being mobbed and thrown into a lime pit, causing him to be blinded and end his days as a blind beggar on the streets of London. However, no evidence has ever been found to confirm these folktales.”

“The murders highlighted the crisis in medical education and—along with a series of cases like John Bishop’s which became known as the London Burkers—led to the subsequent passing of the Anatomy Act 1832, which expanded the legal supply of medical cadavers to eliminate the incentive for such behaviour. The Act authorised persons who had legal custody of a dead body to send it to a medical school before burial, so that it might be used for the study of anatomy and practice of surgery. If relatives could not be found, Public Health Authorities, Parish Councils and Boards of Guardians etc. counted as legal custodians.”