You are here: Home › Articles › Carnacki, the Ghost-Finder

“Thomas Carnacki is a fictional supernatural detective created by English fantasy writer William Hope Hodgson. Carnacki was the protagonist of a series of six short stories published between 1910 and 1912 in The Idler magazine and The New Magazine.

Notes on the series

The stories are inspired by the tradition of fictional detectives such as Sherlock Holmes. Carnacki lives in a bachelor flat in Cheyne Walk, Chelsea; the stories are told from a first-person perspective by Dodgson, one of Carnacki’s four friends, much as Holmes’ adventures were told from Watson’s point of view. Whereas the Holmes stories never made use of the supernatural except as a red herring, this is the central theme of the Carnacki stories.

The character of Carnacki was inspired in part by Dr. Hesselius, a supernaturally inclined scientist who appeared in short stories by the Irish fantasy writer Sheridan Le Fanu, notably the early and influential vampire story “Carmilla“.

The stories are presented using a framework story: Carnacki periodically sends notes of invitation to four friends, asking them to come to dinner and hear his latest tale. One of the men, Dodgson, is the actual narrator of the story, who comprises an extremely minimal part of each Carnacki story. Carnacki forbids discussion of the case in question over dinner. After dinner, Carnacki lights his pipe, everyone settles into their favourite chairs, and he tells the tale without interruption.

Each of Carnacki’s tales tells of an investigation into an unusual haunting, which Carnacki is charged with not only understanding, but also ending. He employs a variety of scientific methods in his investigations, as well as resorting to more traditional folk-lore. He employs technologies such as photography and his own fictional invention, the electric pentacle. He is not dogmatic, and always uses evidence to draw his final conclusions, so that in some stories he decides the haunting is real, while in others it is staged or faked by an adversary for various reasons. This variety makes the stories suspenseful, as the audience is never sure if the ghosts are real or not.

After the tale is complete, Carnacki usually answers a few questions from his guests, but does not discuss the case at great length.

In addition to the trademark electric pentacle, Hodgson invented several rituals and ancient texts that feature in the Carnacki stories.

Carnacki uses a fictional ancient text, the Sigsand Manuscript, as a resource to protect himself against supernatural influences. Carnacki refers to Aeiirii and Saiitii manifestations, the latter being more dangerous and capable of overcoming Carnacki’s protective devices, and several rituals, including the Saaamaaa Ritual, with its mysterious eight signs and “unknown last line” that is invoked in “The Whistling Room” by a mysterious power.

There are references to even more arcane fictional works, including the Incantation of Raaaee, but no further information is provided in the stories.”

You can read all of the stories AND get the free Forgotten Futures RPG here:

Illustration of the Electric Pentacle by Marcus Rowland

Fans of Hellboy should check out the Carnacki illustrations done by MS Corley:

The legendary Ghost-Finder and Supernatural Detective by William Hope Hodgson. He usually gets called in to investigate allegedly supernatural cases.

The protagonist of eight stories published between 1910 and 1912, Carnacki relates his cases and adventures to his four friends (the author included among them) at his flat in Cheyne Walk, Chelsea.

He is usually called upon by various people to help them with seemingly supernatural problems. But while a case might seem to have it’s roots in the realm of the paranormal at the start, some (as he investigates further) have more human causes by the end.

For the problems that have actual supernatural causes, Carnacki usually comes equipped with both items of his own invention (like the Electric Pentacle) and a vast knowledge of ancient texts, rituals, and spells to combat any hostile phantoms. Key among them being the Sigsand Manuscript, an ancient text/tome that seems to have many of the needed incantations, spells and other rituals in it’s pages.

Carnacki has appeared sporadically ever since. 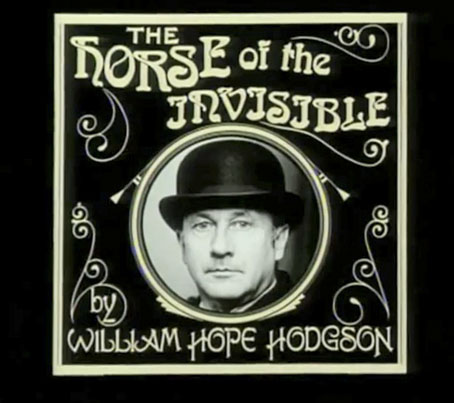 “Carnacki encounters the Second Doctor in the 2002 Telos novella Foreign Devils, and was a member of The League of Extraordinary Gentlemen in 2007′s Black Dossier.”

The entire episode of “The Horse of the Invisible” form The Rivals of Sherlock Holmes:

One Response to "Carnacki, the Ghost-Finder"