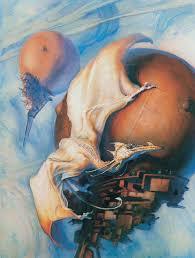 Welcome friends, to Falkenstein Friday! I have fantastic news to reports! Curious Creatures has been fully transcribed from Captain Olam’s notes and is even now being beta read by Allies of the Second Compact! Once they finish I will give the book one more polish and then turn it into my editors.

But why wait when I can give you a taste of what awaits you when the book is released! I ask, nay beg! for feedback. Do you like an idea in the outline? Or, perhaps more importantly, dislike it? Comment, please, and let us know what and why. Your thoughts on Castle Falkenstein are just as important as our’s.

Now, without further ado, an outline of Curious Creatures, the first book in the revived Castle Falkenstein line!

And thus ends the outline.