“This free Conan Roleplaying Game Quickstart gives you an introduction to the 2d20 system, a short adventure, 7 pre-generated characters and an overview of the world of Conan and the Hyborian Age.“ 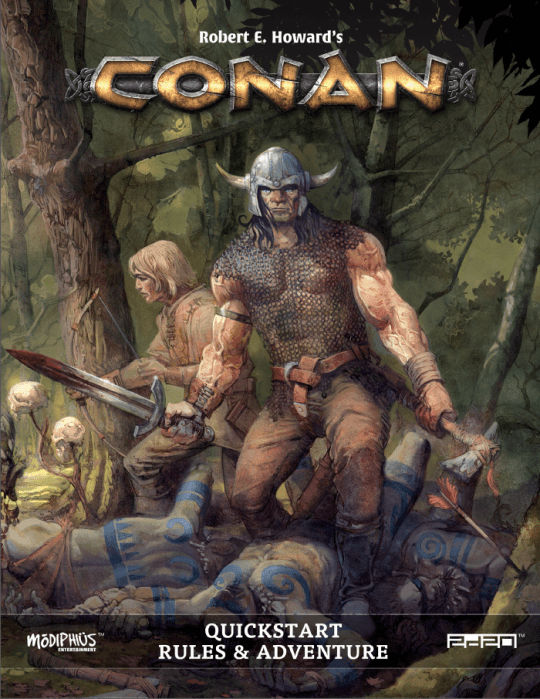 “WELCOME TO THE WORLD OF CONAN!

This time, called the Hyborian Age, is an era of great antiquity and renewal, brutality as well as beauty. Kingdoms rise amidst the remains of bygone lands, places that were themselves swept away in cataclysmic upheaval. Forgotten secrets of sorcery, ancient artifacts, and devices of strange science lurk undiscovered in moldering ruins within the walls of lost cities, to be discovered by the daring or the unwary. Gods have flourished and been forgotten, but the great black vale of eternity remains, and within this outer dark are cosmic horrors of a scale unimaginable, their evil beyond all comprehension. Humanity has crawled back from mere savagery time and again, and nations stand ready to rage across the map, sweeping away civilization once more in a tide of blood and iron.

ROBERT E. HOWARD’S CONAN: ADVENTURES IN AN AGE UNDREAMED OF is a brand new roleplaying game based on the incredible character of Conan and of the Hyborian age.”