Cosmic Patrol is a fun pulp sci fi game and you can download two adventures, both with quick start rules for FREE, here:
http://www.cosmicpatrol.com/?page_id=71 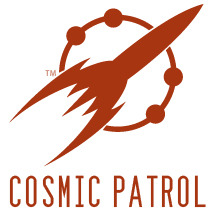 Cosmic Patrol is a pen & paper roleplaying game set in the retro-future of the 1940s-50s. It’s a wild and dangerous place, so make sure your atomatic raygun is loaded and your rocketship is fueled. You’ll need them, cadet!

Cosmic Patrol is a narrative, cinematic game that’s easy to learn and can be played with little preparation. Players not only control their characters, but build the plot and fill in the details as they go.

PCE21+ Earth rife with conflict as nations vie for economic and military superiority.

PCE20 Dr. Lalonde announces that Seneca 1 will pass close to Earth. He calls for an astronomy conference to plan a scientific study of the comet.

PCE20 Confusing information is gathered about the comet. It appears to be both slowing and breaking apart.

PCE20 In the aftermath of the strikes, attacks are reported worldwide. Assailants are described as “lizardmen,” and they are concentrated around the various impact sites. The “comet” turns out to be an Uth hive.

PCE20 Uth warriors continue to spread from landing sites. They raid and attack, loot and kill. With no other choice, world powers unite and push back the invaders.

PCE20 Within six months, the Uth are declared wiped out. Shattered nations unite. Researchers find troves of advanced, non-human technology in the remains of the Uth hoard.

PCE19 Scientists study the found items to engineer amazing new devices. Most importantly, they find a large stash of a mysterious element dubbed “contraterrene,” a kind of opposite matter. Along with a fully united Earth, these discoveries spur technological advancements to a frenzied pace in thesubsequent years and allow the industrial complex to achieve astonishing speeds of manufacture.

PCE15 United government announces first Patrol mission: Rocketship Exploration Moon (Rocketship EM). The ship is an advanced design using contraterrene engines, and will carry scientists on a mission to establish a moon base.

PCE14 A powerful message is broadcast on Rocketship EM’s frequency from beings calling themselves “Moon Men.” They claim the Moon as their own and forbid any and all future landings. Rocketship EM is lost, with its entire crew.

PCE14 Finding another threat so close to home sends Patrol leadership into panic. At an emergency meeting, new captain Roderick Dyson dresses down the commanding council. Councilors, mostly scientists, are impressed and embarrassed by the tirade. Three days later, Dyson is named head of the entire Cosmic Patrol.

PCE14 Coordinator Dyson begins a crash course to change the Patrol into a more proactive force. He announces plans for an orbiting space platform.

PCE11 Platform Beta begins construction. Beta will serve as a watchpost, with special attention given to monitoring the Moon.

PCE9 The Mars Expeditionary Force (MEF) blasts off from Platform Alpha. The MEF is mostly Cosmic Patrol troopers. Dyson plans to secure a landing zone first, then send in the scientists.

PCE9 The MEF arrives on Mars, landing near Olympus Mons. Within hours, they are engaged by “barbarians.” The Battle of Olympus Mons is a decisive Patrol victory and sees the first use of rayguns in combat. To everyone’s surprise, the barbarian attackers are human.

PCE9 Aelita, Suzerain of Mars, gathers the Amazon battle tribes of Mars and attacks the MEF. They fight to a standstill before a truce is declared.

PCE9 The Venus Expeditionary Force (VEF) blasts off from Platform Beta with a large number of troopers and robots; a few scientists are included.

PCE9 En route to Mars, Dyson decides to put a scientist in charge of the VEF.

PCE9 The VEF reaches Venus and spots the ruins of an advanced civilization. A signal reaches the VEF ships from the remnant of the Venusian people—who, like the Martians, are human.

PCE9 The VEF lands and is welcomed by the Venusians, until the Venusians see the VEF’s robots. The Venusians demand they be destroyed. The VEF agrees to send the robots back to their ships.

PCE9 As VEF/Venusian treaty talks begin, Venusian Automen attack. VEF robots are corrupted and attack the humans, too. The robot forces are destroyed, but with heavy losses.

PCE8 The generally agreed-upon beginning of The Great Expansion.

PCE6 Over the next few years, Venus-Earth-Mars relations grow closer.

PCE3 The Cosmic Patrol explores the outer planets, making many stunning discoveries. Ancient ruins are found on Callisto. Amazing creatures are discovered on Neptune, including the infamous Neptunian Mind Plants.

PCE1 Ships begin to disappear in and near the asteroid belt.

PCE1 A Patrol rocketship investigating the disappearances finds wreckage and suspects
pirates. Activity is detected on large asteroid and the Patrol mounts a raid.

PCE0 The pirate base turns out to be a huge nest of Uth left over from the initial invasion years ago. The Patrol rocketship barely escapes.

PCE0 Dyson and the Patrol mount a huge attack against the Uth. The operation is the first largescale cooperation between Venus-Earth-Mars forces.

CE1 Generally accepted beginning of the Cosmic Era. Many advances are made in all fields of science, but particularly in robotics.

CE1 To combat space piracy and any further cosmic threats, Dyson proposes a union of the three human planets into a single, powerful organization. Venus agrees immediately, and after some direct “talks” between Dyson and Aelita, Mars agrees. The Great Union is formed.

CE3 “Fractum Drive” developed. A prototype ship successfully travels to Ross 154 and back.

CE4 The Cosmic Patrol begins construction of a fleet of fractum drive-enabled ships and begins exploration of the cosmos. “Dyson Protocol” is established.

CE5+ Thousands of reports convince Dyson and Cosmic Patrol leaders that the galaxy is in the midst of a gigantic war. No one knows who is on what side or why they are fighting.

CE6 Rocketship Phantom travels to the Veil Nebula, arriving in the midst of a gigantic space battle between unknown forces.

CE6 Rocketship Winston travels an astounding 10,000 astrons coreward and discovers the Eiger Empire. Damaged while trying to make contact, the Winston leads pursuing Eiger ships on a wild goose chase for three weeks before finally breaking free and reporting back to Earth.

CE6 Cosmic Patrol Intelligence Service is established, with the mission to gather information from the galaxy at large.

CE7 First extra-solar Patrol base is established at Gliese 581, about 6.5 astrons away.