Game Chef is an annual analog game design competition. First held in 2002, it’s led to the creation of hundreds of envelope-pushing first drafts. Game Chef gives participants 1 theme, 4 ingredients, and 9 days in which to create an analog/tabletop game design.

The competition runs simultaneously in seven languages this year. Entries are peer reviewed, with finalists submitted to a shadowy cabal. A winner is chosen in each language, with one emerging as the year’s world champion. Game Chef is for you, regardless of whether you’ve ever thought of yourself as a game designer. We aim to make the competition as accessible and welcoming as possible.

If you’d like to learn more about Game Chef, visit our explanation page here.

If you’d like to see our finalist announcement, and more information on our judging team, click here.

We four judges (Feiya Cook, Jonathan Walton, Lillian Cohen-Moore, and Avery Mcdaldno) have spent the past week deliberating. There were so many strong entries among the finalists this year, each bringing something new to the table.

You can view all of our judge’s feedback, both positive and critical, at: Judges Feedback.

In case you’ve forgotten, here are our nine finalists:

By the Author of ‘Lady Windermere’s Fan’, by Ed Turner.
Contempt for the Ogre-Poet, by Sean Smith.
Degenerate Semantics, by Mikael Andersson. A flawless 4 out of 4 possible nominations!
I Lost My Journal On Zont, by Kevin Omans.
Palm and Pine, by Jeff Raglin.
Rangers Upon the Wild, by Dev Purkayastha.
The Beekeeper, by Mel Leverich.
The Stuff of Dreams and Nightmares, by Danny Wall. A flawless 4 out of 4 possible nominations!
The Three and the Wheel, by Dana Fried.

This year, we’ve got a runner up – a game that captured our attention and gave the eventual winner a run for its money.

That runner up is I Lost My Journal on Zont, a game that impressed us with its elegance, polish, and tone. Its small social footprint, combined with the option to play as either EXPLORERS or AMBASSADORS, means that Zont is accessible and replayable. Congratulations, Kevin Omans.

While all the finalists brought something unique to the table, there was one game that struck us all. It was beautiful, minimal, and broke new ground. At least one of us cried while reading it for the first time.

Our 2014 English-language Game Chef Winner is The Beekeeper, by Mel Leverich. A restrained narrative of nostalgia, love, and bee-keeping… The Beekeeper is a two-player game that captured all of our hearts. The game isn’t perfect, just yet; all of the judges expressed concern about the game expecting players to answer all sixty of the tile questions over the course of play. But Game Chef isn’t about making something perfect. It’s about making something new.

And The Beekeeper feels new.

Congratulations, Mel, on winning Game Chef (and on winning the Class of 2004 Memorial Prize)! 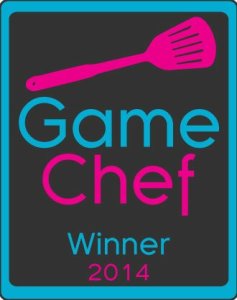