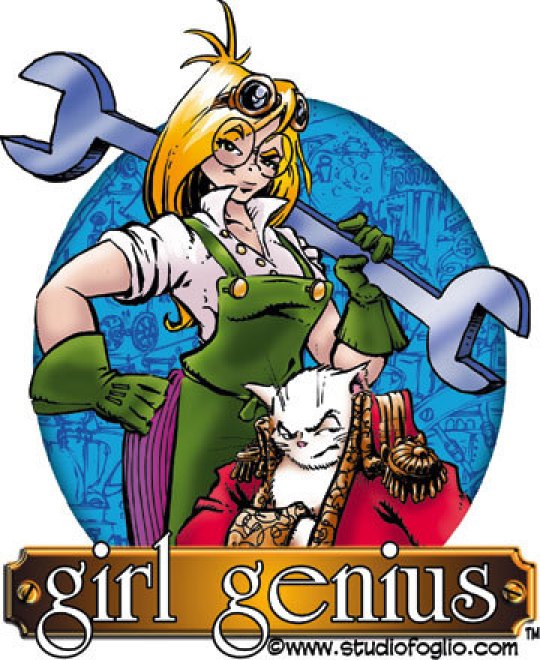 The worlds of Girl Genius and Gunnerkrigg Court are about to collide in a legendary showdown!  Legendary Showdown: Machines & Magic is a game of comically epic battles where each player uses strategy, sabotage, and one-upmanship to develop a secret battle plan.  This lighthearted and easy-to-learn tabletop game is designed to be enjoyed by experienced gamers and newcomers alike.  Haven’t read the comics before? No problem! No background reading is required to help your characters win battles and be the last one left standing! Let the mass chaos, devious strategies, and humorous battles begin!

Who is this Girl Genius?

Girl Genius is a three-time winner of the highest honor awarded for works of science fiction and fantasy: the prestigious Hugo Award.  The webcomic follows Agatha Clay, a seemingly mild-mannered mechanic who discovers she has inherited the abilities of a spark (a feared mad scientist with the natural ability to understand complex sciences and wield them for their own chaotic purposes). Even more shocking, Agatha discovers that she is the descendent of a long lost line of sparks whose unparalleled skills and insanity made them legends in their own time.  Cleverly written and beautifully illustrated by Kaja and Phil Foglio, Girl Genius is full of adventure, romance, and plenty of MAD SCIENCE!

What is this “Gunnerkrigg Court” of which you speak?

This highly praised comic is the work of the celebrated author and artist, Tom Siddell.  The story follows Antimony Carver as she attends an isolated boarding school called Gunnerkrigg Court.  Antimony soon learns that the Court is no ordinary school – the teachers are hiding ancient conspiracies, it is bordered by a forest full of dangerous monsters, and the school is inhabited by strange creatures and students with special abilities.  In the course of her adventures, Antimony befriends an ancient trickster god, discovers her own supernatural powers, and begins investigating the dark secrets of the court.

Why do we love these comics so darn much?

If you aren’t already faithful readers, allow me to let you in on a little secret: these comics rock.  The stories are masterfully crafted, the art is top notch, and the characters are instantly endearing.  It’s no wonder that these comics have won so many rewards and attracted such loyal fans.  We also appreciate that both comics feature characters who make great role models.  For example, Antimony Carver and Agatha Clay are some of the strongest and most intelligent women you could hope to meet and their friends will stop at nothing to stand by their sides.

How to play the game that will… change your life

Each player is dealt a total of five characters from the worlds of Girl Genius and Gunnerkrigg Court.  These characters line up in anticipation for their chance to battle.  During the round, you try to equip characters in your line with powerful weapons and bonuses while equipping characters in other players’ lines with faulty or otherwise terrible equipment.  You can also give yourself secret advantages or sabotage your opponents.  When the round ends, the characters at the front of each line will engage in a (legendary) showdown.  But the madness doesn’t stop there!  You can rearrange your line and the lines of your opponents to change who will be competing in the final battle.  The round suddenly ends when all players but one (the poor chap) are ready to fight.  At that point, each player reveals his or her battle strategy and the winner is decided.  You can view a game play tutorial from the original Legendary Showdown (featuring The Adventures of Dr. McNinja) here:

Wait, did you just say there is another Legendary Showdown game?

Why yes, yes there is!  The original Legendary Showdown features The Adventures of Dr. McNinja, an incredible comic by Christopher Hastings (the writer of Adventure Time comics, Marvels’ “Longshot Saves the Marvel Universe” miniseries, and much more).  The original Legendary Showdown was so well received that we decided it was time to expand the Legendary Showdown family and help promote other comics that we love.  The new version can be used as a full stand-alone game or an expansion. Which, if you play your cards right, means that you could find Dr. McNinja with a Spork Gun facing off against a tiny Dingbot armed with a Moon Laser.

So, how is this version different?

The rules are the same, but we have swapped out a large number of action, weapon, bonus, and face down cards to create an all new experience that allows additional strategies.  In other words, Machines and Magic is a new flavor of Legendary Showdown – a flavor designed to delightfully complement the original game or be delicious all on its own.  Some of the changes include negative face down cards and a new category of cards called “Play Immediately cards” that add an occasional dash of chaos.  Please do not lick the cards.

First and Foremost, The Game!

Legendary Showdown: Machines and Magic includes character and playing cards from the worlds of Girl Genius and Gunnerkrigg Court.  The cards are printed on high quality linen paper with a black core center and come in a fantastic box created by Tom Siddell and Kaja and Phil Foglio.

You can also grab a copy of the original Legendary Showdown at Kickstarter prices.

From the world of Gunnerkrigg Court:
Alliance (x2)- an Action card that protects your character even if you lose the round.  Of course, it requires an involuntary alliance…
Nobody
Oh no, the saddest face!
Seraph

From the Girl Genius Universe-
Calming Pie (x2)- an Action card that lets you remove a weapon from any character and place it in your hand
Humongulus
Mr. Tock
The Beast

Who doesn’t love shiny metal things?  Lovingly designed by the authors themselves, our Collectors coins include Antimony & Kat, Moxana the Muse of Mystery, Coyote, the Robots of Gunnerkrigg Court, and a Transylvania Polygnostic University alumni coin for prestigious mad scientists such as yourself.

What could be better than having the characters from Gunnerkrigg Court and Girl Genius battling right on your fridge?  Absolutely nothing.  Well, OK, maybe a few things could be better (jet packs come to mind), but this is still pretty sweet!  Four unique sets are available, including a Gunnerkrigg Court set with 19 magnets, a Girl Genius set featuring 16 magnets, a Dr. McNinja set with 12 magnets, and a prop set with 32 pieces to liven up the action.  That’s nearly 80 magnets.  Buy all 4 sets, and your refrigerator will never be boring again!

How to include Add-ons in your order

Each reward level has add-on instructions listed for what we think will work best for that level. If you are looking to add different kinds of add-ons that aren’t listed in your current reward level, look at the others available reward levels to see if one is better tailored for your needs.

If you can’t find the reward level you want, or need something extra, below is a quick guide to further customizing your selected reward level.

If your selected reward level already includes a game, you can add extra copies of Legendary Showdown: Machines and Magic for: $25 each (EU $30 each)

All additional add-ons have free shipping.  European Union (EU) prices are higher because they include VAT.

All reward levels that include the game have free domestic shipping.

All international reward levels that include the game have discounted shipping.

For rewards going to the European Union that include a copy of the game, shipping prices for reward levels, and add-ons prices are higher because they include VAT in their price. We will ship games to European Union backers directly from Europe.

For all other international backers not in the European Union, you may receive customs or taxes charges from your country when your rewards are imported.

For social stretch goal (Shares), there are multiple ways to get achieve these goals. These include: