You are here: Home › Review › Review: JLA: Age of Wonder~ 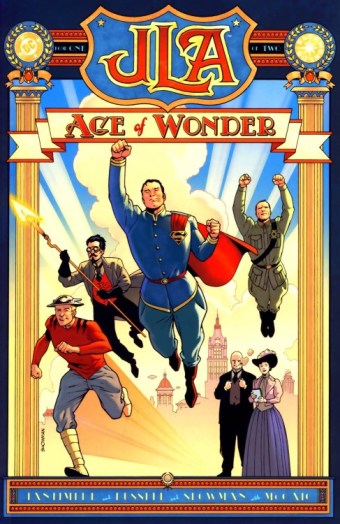 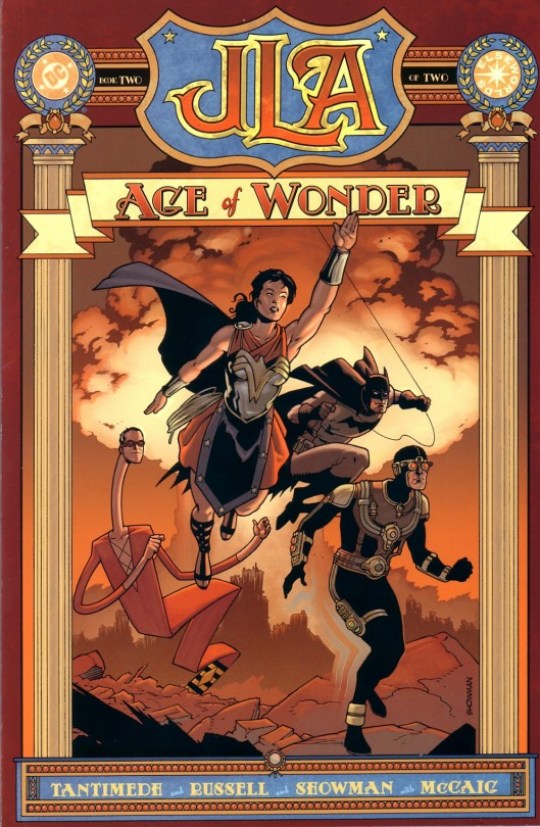 As with all Elseworlds comics (like Marvel’s “What If..?” line before them and DC’s own “Imaginary Stories” predating both) JLA: Age of Wonder re-imagines familiar characters by taking them out of their traditional place and time. This two issue series kicks off with in 1876 with (The) Superman making his inaugural appearance at the first ever World’s Fair held in the USA: Philadelphia’s Centennial Exposition.

His background is the same (Kryptonian infant, crash in rural US, raised by the Kents) it’s only the timetable that has been changed. Because of his humble upbringing Superman maintains his Golden Age positivity and belief that the future can be a better place. In short order he finds himself working with Thomas Edison, Nikola Tesla… and Lex Luthor. The genius of these men, and the reverse-engineering of of Kryptonian technology, leads to Ted Knight becoming The Starman and to the accident that turns Barry Allen into The Human Flash. In 1896 Hal Jordan takes on the mantle of the First Green Lantern of Earth.

There is real conflict at the heart of this tale and can be summed up by the ideologies of the classic hero and his foil. Superman is a hopeful uptopianist; he wants to use his gifts and the wonders of modern technology for the good of all mankind. Luthor wants only power and the chance to make as d*mned much money as he can. It’s a question we still wrestle with: what is the purpose of technology? To make profit or to move humankind forward? Is technology an inherently corrupting influence? If one has power how should they use it? What qualifies one’s actions as “good”?

All of the characters grapple with these issues, some ending up on surprising sides of the arguments. The late appearance of The Green Arrow (at his Robin Hood best) brings the point home that these are issues of class, of the haves and the have-nots (who work for the haves).

The second issue picks up a few years after the end of the first, in 1911 with a world on the brink of a global war. Wonder Woman, Plastic Man, The Atom and The Batman come into the story. (Batman, interestingly enough as a sort of legacy character to The Green Arrow). As Earth teeters on the brink, and Luthor plays Machiavellian power games, the “heroes” are forced to make tough choices about might, right, technology, and society.

I’m not generally a big fan of Superman, but here his clean-cut view point, his idealism, his hope for humanity really works. He shines in a way that feels good and right. Even in a bad world he remains a good man. He stands, once again, as a paragon of what a hero should be.

The power of the Elseworlds stories isn’t that they can place your favorite costumed adventurers in new situations but that they can present us with a world that is totally changed from our own. Instead of having to keep reining in superheroes so that their world doesn’t become too alien to ours, the creators of the story are free to present radical outcomes. JLA: Age of Wonder ends with a modern world very different than ours, and with a twist that makes sense, that fits the spirit of the story and explains why, despite featuring so many Golden Age characters, this isn’t a Justice Society story.

PS: I just have to say that I love the costume designs for Superman and The Flash, they’re just perfect.