From The Other Side’s Dinosauria campaign for Ghosts of Albion:
http://theotherside.timsbrannan.com/2011/08/dinosauria-characters-lady-valerie.html 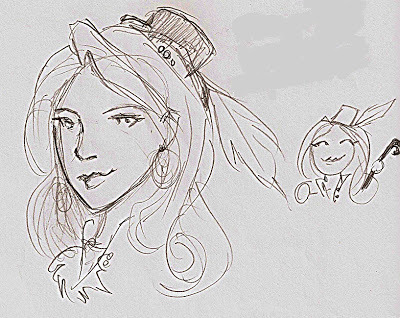 Another character for Dinosauria:  The immortal Lady Beaumont.
Valerie has the distinction of being the first character ever created for Obsession.
Looking forward to seeing how she gets played in the new game. Lady Valerie Beaumont

Known History:
Widow from Lord Charles Beaumont who died some 5 years previous, she has spent the last year becoming familiar with society again. Her husband was a known traveler and adventurer who had a nose for the strange and unusual, and some even say that this may have rubbed off on her.

Lady Beaumont will be making her first appearance in a beautiful blue dress, that is at the height of fashion with a delicate white/pearl colored shawl. Her evening hat is the same color of her dress, with just a bit of mesh weave along the front.

She does carry a small cane to help her walk, she seems to lean on it more for support than actually needing it to walk.

Lady Beaumont is just over five feet tall and she has the most alluring green eyes.

Secret History:
Lady Beaumont was born in 1569 and is immortal.
She was a young English girl that made her way to the new world in the year 1585.  She came to the new world and settled in the Roanoke Colony where she lived for a couple of years.  Then something happened.  She was caring for the young Virginia Dare and then woke up several days later and several miles from home.  When she had managed to return to the colony, everyone was gone.  She also discovered that she was immortal and was certain that the two were somehow linked.
Valerie spent the next few years roaming the new world.  She learned magic from some of the few true witches in Salem and more from the American Indians.

She has since returned to England, but now considers herself an American.

She is acquainted with the Protectors of Albion and has worked with Walter Edwards before.  She is also very good friends with the American Statesmen Benjamin Franklin and considers him a dear friend.  All of these people do know her secret.

She has a ring on her right little finger that manages a glamour that “ages” her.  A gift from a former lover. Currently she appears to be in her mid 40s.  Without the glamour she appears as she did when she discovered her immortality, a young woman of 18.  Her mind though is as someone approaching 300.
She walks with a cane, but that is a mere  affectation.  The cane houses a sword of fae steel (very rare indeed as the faerie are loathe to work steel).  She is quite adept at it’s use (having practiced for centuries) and in her hands it becomes a deadly, formidable weapon.

Valerie is given more freedoms in Victorian society than would normally be due a woman.  She has status, money and is widowed, all which contribute to her status, and she is an American so society often looks the other way for her.