You are here: Home › Articles › New to the VAE Library: Larger Than Life, Adventures in the Lost Lands & Colonial Lemuria~

Adventures in the Lost Lands, Larger Than Life and Colonial Lemuria from Two Hour Wargames~ 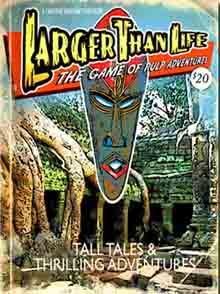 It’s about heroes moving from scene to scene at breakneck speed. Hot on the trail or maybe a step in front of the bad guys.

But mostly it’s all about the story. 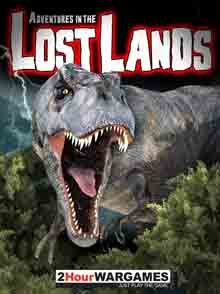 Adventures in the Lost Lands: http://www.twohourwargames.com/adventures-in-the-lost-lands.html

“Adventures in the Lost Lands, introduces you to a world like no other. A world of giant creatures and prehistoric men where you can:

Be a Pulp Era hero exploring Lost Lands and searching for valuable treasure. Lead your tribe of primitive cavemen in a fight against other primitive tribes. Be a modern day big game hunter who travels to a pre-historic land that time forgot. Command a Victorian Era expedition bent on discovery and conquest. Be a dinosaur, not only a dinosaur, but THE dinosaur, as you take on all others for supremacy.” 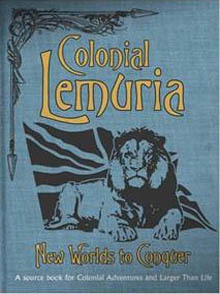 “Lemuria – land of adventure. Old when Eden was young, it is a land of secrets both ancient and new. It beckons travelers, both experienced and new. Lost civilizations, exotic people, and strange steam driven machines open the door to a world of wonder.

Lemuria – where the established European powers of Colonial Adventure will vie with ancient peoples for control of the land and its people. To bring their bustling markets, mines, and gems under their control. Fight fierce desert warriors. Travel from steaming jungles to freezing mountains and beyond in search of great wealth.”

This last one is for use with either the Larger Than Life or Adventures in the Lost Lands RPGs or the Colonial Adventures wargame.

I’m a sucker for any game involving dinosaurs… and in Lost Lands you even get to PLAY the dinosaur! Bonus nifty!