You are here: Home › Articles › Now watching: Those Daring Young Men in Their Jaunty Jalopies

Now watching: Those Daring Young Men in Their Jaunty Jalopies aka Monte Carlo or Bust (1969)

“Monte Carlo or Bust! is a 1969 comedy film. The story is based on the Monte Carlo Rally – first raced in 1911 – and the film recalls this general era, set in the 1920s. It is a British/French/Italian co-production and was released in the United States under the title Those Daring Young Men in Their Jaunty Jalopies. The animation was the work of Ronald Searle, who was also featured in Annakin’s earlier Those Magnificent Men in their Flying Machines.

A lavish all-star film (Paramount put $10 million behind it), it is the story of an epic car rally across Europe that involves a lot of eccentric characters from all over the world who will stop at nothing to win.[2]

The film is a sequel to the 1965 hit Those Magnificent Men in their Flying Machines. Like the earlier film, it was written by Ken Annakin and Jack Davies and directed by Annakin, with music by Ron Goodwin. The title tune is performed by Jimmy Durante. Some of the cast from the first film returned, including Gert Fröbe, Eric Sykes and Terry-Thomas; the latter appeared as the equally dastardly son of the character he had played in the earlier film. Tony Curtis and Susan Hampshire played other contestants in the race. Curtis also starred in the similar period-piece comedy The Great Race (1965) from Warner Bros.” 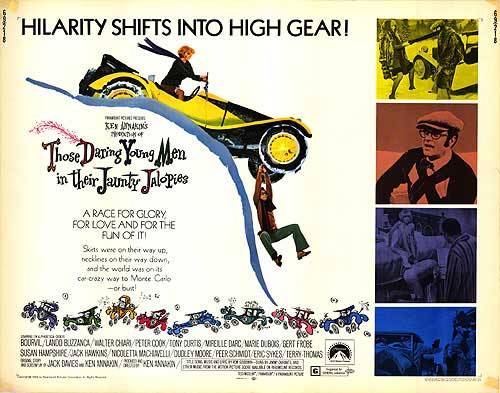