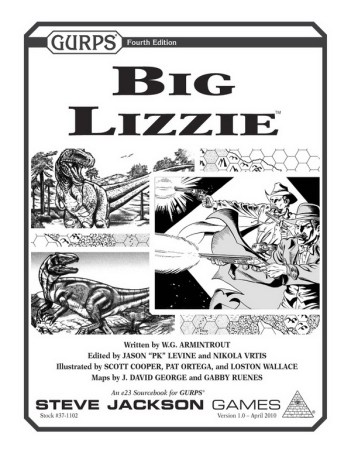 The story here works in two of my favorite elements: cowboys and dinosaurs.
The real strength though, is that author W.G. Armintrout goes for the gusto with this scenario. He knows it’s over the top, hell a little goofy even.

Armintrout even takes it up a notch by turning this tale of six-shooters and megafauna into a *love story*. Catch this partner, Big Lizzie is the chronicle of the kidnapped lovely Donna Nesbitt and the Characters heroic attempts to rescue her.

To help bring this aspect of the adventure into focus Armintrout introduces “Romance Points” that are used to decide who’s going to win the lass’s hand after all the prehistoric monsters are overcome. It’s this element that pumps fresh blood into a what could have been a typical chase. High marks to Mr Armintrout for this.

There are some challenges here though.
It would be hard to work Big Lizzie into most campaigns and just as hard to build a new campaign around this adventure. As such Big Lizzie will probably work best as a one shot.

There’s nothing wrong with this of course, but it will be hard to keep the jurassic secret of the game under wraps. Most players are going to be very suspicious if you try to sell them the “oh it’s just a typical western game” bill of goods.

There is one thing that I think would make this adventure distinctly better: pre-gen Characters.

The Players are going to have to pick from one of twelve Characters any way, why not go the extra step and have them worked out?
Sure some Players would prefer to build their own PC but pre-gen personas would allow you to jump right into the action faster (always a plus with one-shot adventures).

In actual play Big Lizzie was an enjoyable adventure, but my Players knew right off the bat that something was up. The romance element of the story quickly became the focus though, so there was a fresh element for them to have fun with. (Though the Cook was a bit disappointed when he was reminded that he was married and couldn’t run off with Ms Nesbitt).