You are here: Home › Review › Stars of Empire RPG~ reviewed on The Steampunk Chronicle

Stars of Empire RPG~ reviewed on The Steampunk Chronicle 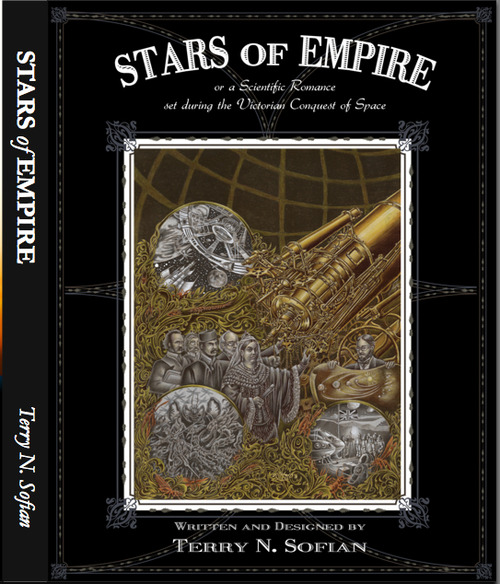 The Stars Shine Dimly On The Empire
Games correspondent Gabriel Colbaugh reviews Stars of the Empire.
By mgcolbaugh on Mar 05 2013

Stars of Empire is a RPG book written by Terry N. Sofian. It uses the Hacktastic d/20 Role Playing System created by Black Pigeon Press. It is a 286 page book that is available on Amazon.com for $29.99, or at conventions where it is sold.

The Book: Stars of Empire is very much an independently released book. The formatting leaves something to be desired. Type can be difficult to read in spots as font size seems to change on occasion. Tables appear to be designed in Excel giving them a very clinical look. Moving back and forth between photography and art can also be jarring, especially since the photos switch between modern and vintage.

The table of contents works about as well as any out there. Sections and chapters are clearly defined, though the information inside is not always listed in the order that would be desired.  Various rules are separated based on specific chapter rather than giving a blanket demonstration right up front. A couple of readings will yield the information desired.

The internal art team should take pride in the work they did, as well as the cartographers. From the bestiary section to the pictures of other planets, the art stands out as clean and giving a wonderful impression of the game’s setting.

The Setting: The game runs with the idea of science advancing far faster than it had during the Victorian time period. The introduction of Aerolyth allowed for greater freedom of movement as well, a mineral that would allow for flight beyond the stars and to other planets. This allowed for Empires around the world to launch into space and onto Mars and Venus where they were met with aliens and mysterious landscapes they weren’t expecting.

Stars is heavily reminiscent of Space 1889 in the sense that it is Victorians in Space. The same planets are colonized, and mysterious aliens appear on Mars. Sofian tried to change things up by rewriting a great deal of Earth’s history which impacted the movement into space as.

Overall, this leaves the setting somewhat uninspired. Victorians in Space has been done before. The writer tried to go about it differently, but it didn’t really stand out in anyway. The writing also felt more like a history textbook than an explanation of the game world in a lot of places. It is not one of the most exciting settings. However, if someone does want to play a Victorian era explorer on Mars, this game will certainly fit the bill.

The System: Stars uses the Hacktastic d/20 system that was created by Black Pigeon Press. It uses the d20 as the primary die for rolling. You attempt actions by rolling the d20 and adding skill score versus a target difficulty. Combat is resolved by rolling the attack roll against a defense roll.

Character creation is fairly straight forward. A player starts with a certain number of points before they buy templates. These templates are basic, advanced or exemplar. Each character has a basic template that determines their starting profession. This also helps with determining abilities, skills and talents which are all also purchased. They are allowed to purchase advanced and exemplar templates after this as well.

The system itself comes off as pretty straightforward and fairly easy to use. Skill checks only require a single roll, while competing rolls for combat should resolve quickly. Character creation is well laid out in the book as well, leaving most of the time dedicated to just figuring out where you want to place your points. Rules for resolution of actions accompany each of the sections that discuss skills or combat or etc.

The Verdict: The book is honestly unwieldy. It feels thick and can be difficult to get through at times. The interior art is lovely, though the constant flip to photography as, as well as some of the style changes, detracts from the final product. The setting is fairly vanilla as it relies on the idea of pushing Imperialism into space.

If that is the sort of game you are looking for, then you certainly could do worse than Stars of Empire. The question really comes down to if the $30 book is a better value than the $8 pdf for Space 1889. It is also a question on if it is worth the money versus more polished games that are already out there. Currently, there is nothing to make this game standout and give me reason to recommend it over other available products.

Correspondent M. Gabriel Colbaugh spends most of his time serving as a technical writer for a waste-water treatment firm, but otherwise spends time writing about steampunk and enjoying fine haberdashery. He lives in Las Vegas with his wife and two furry children, River and Isabela. He also works to maintain the Las Vegas Steampunk Tea Society with a host of others.

Thank you for taking the time to review Stars of Empire. We hope to clear up the formatting issues with the next edition, which will be out soon. There are two errors of fact in your review though. On Amazon SoE retails for 24.99 not 29.99 and it is also available as a .pdf from RPGNOW.com for 14.00 (and you can look for a price reduction there as soon as rights transfer back to me from the new defunct Black Pigeon Press)