You are here: Home › Bestiarum vocabulum › The Dinosaurs of Crystal Palace Park

In honor of the upcoming book they’ve blogged about Victorian dinosaurs. Read the post here: https://fatgoblingames.com/blogs/castle-falkenstein/the-dinosaurs-of-crystal-palace-park 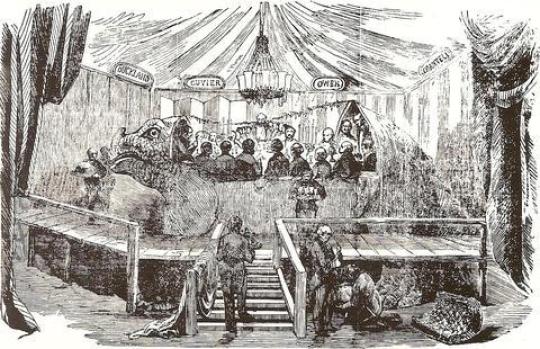 Greetings friends! Welcome to Falkenstein Friday. I’m so pleased to be speaking with you once more.

How could we produce a Castle Falkenstein supplement all about creatures without including the great fossil lizards who so fascinated the Victorian world and inspired some of the worst behavior in science?

Though he wasn’t the first to discover dinosaur fossils, Richard Owen coined the term “dinosaur” in 1842 when he recognized the fossils of three different species, the Iguanodon, Meglasaurus and Hylaeosaurus, shared certain features. It wasn’t long before Owen had the backing of Queen Victoria’s consort, Prince Albert, and was able to establish the Natural History Museum.

By 1877 dinosaur fossils were being discovered across the world. Two prominent paleontologists, Edward Cope and Othniel Marsh, engaged in bribery, public shaming, bickering, brawling, and the destruction of fossils to keep them out of rival hands.

However! Let us discuss the dinosaurs of Crystal Palace Park! Owen and sculptor Benjamin Waterhouse Hawkins worked together to create scientifically accurate (for the time) sculptures of a number of extinct mammals, dinosaurs and other animals. The models were life sized and in 1852 Hawkins was able to hold an entire banquet inside the mould of the Inguanodon models!

A banquet in a dinosaur.

All in all, fifteen genera of extinct animals were represented in Crystal Palace Park. More were planned but funding was cut off and incomplete sculptures were, sadly, destroyed!

Over time, as the models were proven to be inaccurate and public funding was required elsewhere, the dinosaurs of Crystal Palace Park fell into disrepair and were eventually overgrown by surrounding plants. A restoration occurred in 1952 but some of the models were moved in the process and became damaged due to exposure in their new homes. Happily, in 2002, the sculptures were renovated. The park itself was restored to properly display them. Missing sculptures were remade with fiberglass and badly damaged aspects of surviving models were recast. They are now considered Grade I listed buildings (a distinction shared by Tower Bridge and the Palace of Westminster) and, thus, of exceptional interest to the United Kingdom and protected by law. 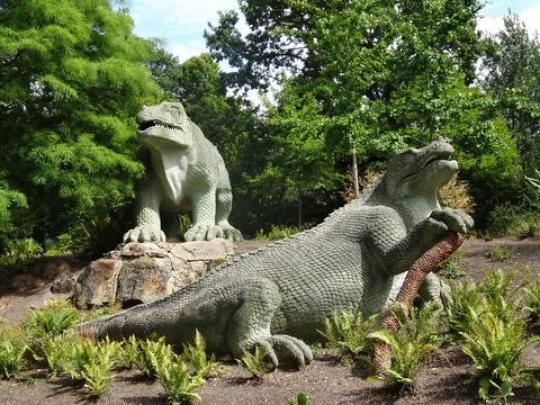 Of course, we include several dinosaurs in Curious Creatures, complete with the statistics you need to bring them to life in your campaign. Rather than making use of modern science and knowledge, our dinosaurs were designed using the knowledge of the Victorian era. After all, living dinosaurs most likely exist somewhere in the world of New Europa and who are we to say, in that world, the experts of the time aren’t right?

Thank you for your time. I look forward to speaking to you again next Friday.

2 Responses to "The Dinosaurs of Crystal Palace Park"