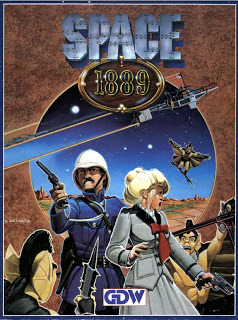 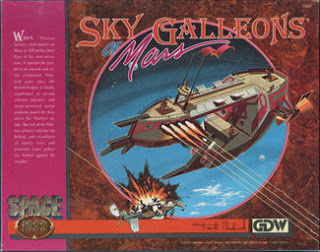 Back in the late 1980s, advertisements appeared for an unusual game, different in some ways from anything that was on the market. Called Sky Galleons of Mars, it was supposed to be a wargame, like Battletech or Car Wars, that pitted individual vehicles against each other in combat. Anyway, it kept being pushed back, and I watched as other people’s interest waned and eventually vanished. I was one of a few people who were still quite excited about the premise: these weren’t just vehicles from a modern or science-fiction background, but from an alternate world where science took a quite different path than it did in this one. These days, you can talk to geeky types and just say “steampunk” to describe the premise, but back then it was a pretty difficult sale to make. The FLGS I frequented (and would later work for) ended up selling only a few copies when it finally appeared in 1988.

Shortly after that, a roleplaying game set in the same background appeared, titled Space 1889. That was a source of some amusement due to the similarity of title with the old TV series Space 1999, of course, which seems to have been the intention. I was still quite in love with the setting at the time, but no one else I knew was, so I picked up a few items, read them eagerly, and let them sit on my shelf otherwise (except for one attempt to run the game, which fell apart for several reasons, not least of which was my incipient Gamer ADD, an illness I am trying to overcome to this day). 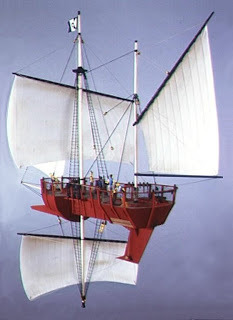 The basic idea of the setting is that the old theory of light propagation that said that there was a “luminiferous ether” (which was the medium that the waves that make up light propagate through) proved to be true instead of relativity and quantum mechanics as in our real universe. Thomas Edison used this ether to develop a type of motor that could propel a vehicle through the void between worlds, and made an historic voyage to Mars (the Moon was difficult to reach for a number of reasons, and in fact the sample scenario in the Space 1889 rulebook is centered around the first voyage to the Moon). There, he discovered an ancient, decaying civilization of Martians whose cities lay on a network of canals. These Martians traveled between their cities in flying ships made with a special type of wood called “liftwood”, lumbered from certain trees found high in the Martian hills. The Martians had developed two different ways of propelling these sky galleons, either by a complex arrangement of sails (“kites”) or by an arrangement of turncranks powering an aerial screw through a flywheel system (“screw galleys”). 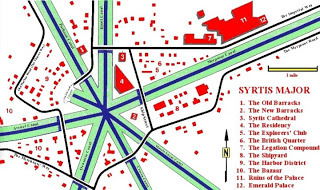 Of course, the European powers quickly colonized Mars, the British setting up a colonial government at Syrtis Major and the Belgians at Copratia. The British colony is described in terms that make it clearly similar to India in our world, while the Belgian Coprates is similar to the Congo (and the Belgians are quite as ruthless on Mars as they were in their African colonies). As later products made clear, the colonial experience on Earth is largely similar to that in our own history. The Europeans, of course, had steam engines, which they quickly applied to their own aerial flyers, along with giving them ironclad hulls.

The Germans, unable to set up a colony on Mars for various reasons, instead colonize Venus. Venus is a jungle world, with lizard people living a primitive existence. The Venusian atmosphere has a corroding effect on liftwood, so British and Belgian sky galleons are at a disadvantage there, and German zeppelins rule the skies.

The arrangement is one of increasing age as the planets move out from the Sun. Mercury is like the Earth in the pre-dinosaur period, Venus when the dinosaurs were ascendant, Mars like a decadent Earth, and there are hints about the asteroids (though few details) that seem to indicate a final destiny. Because the ether flyers are powered by solar steam plants (since burning coal is impossible in the vacuum of space), there have been no explorers further out from the Sun.

For some reason, when people talk about running the game, they almost always follow it up with “but using [some other set of rules]”. There seems to be a perception that the rules of the RPG are somehow unusable. Nothing could be further from the truth, actually. The rules are beautifully simple, but yet also broadly useful enough to satisfy most gamers. They are an early, cruder but simplified version of what would become the GDW House System (which would power a number of RPGs produced by GDW, including Twilight 2000, Traveller: The New Era, Dark Conspiracy, and Cadillacs and Dinosaurs, among others). Characters have six stats, which are similar to those from Traveller: strength, agility, endurance, intellect, charisma, and social level. Each of the stats is rated from 1 to 6, which can be generated in one of three ways. The first method is to rate each stat in order from 1 (weakest) to 6 (strongest), using that number as the rating. The second is to divide 21 points between the stats, with a minimum of 1 and a maximum of 6. The final method is to roll a single d6 for each stat in order, taking the result (but if the total of all six is less than 18, add points as desired, within the limits of 1 minimum to 6 maximum, to bring the total up to 18).

Each stat is associated with four skills. Many of these skills cascade to sub-skills (Marksmanship cascades to Pistol and Rifle, for instance). In those cases, the player must choose a single sub-skill as the specialty, though the other sub-skills are also known by the character. To gain skills, a character is given one or two careers, plus a number of general skill points. A career gives a number of skill points in certain specified skills (and also affects such things as starting money, and might give a character an “Associate”, which is an NPC who is closely associated with the character – examples of the latter include the “gentleman companion” who accompanies an Adventuress and gives her a facade of legitimacy in the intensely patriarchal world of the Victorian era, the maid or manservant who accompanies a character with a social level of 6, or conversely the bumbling “master” who is influenced by a Personal Servant character, or the “henchman” who serves a Master Criminal).

To resolve most actions, there are two different methods. The more involved method involves rolling a number of dice (all dice are d6 in Space 1889) and comparing the total to a target difficulty number (lifting things is a difficulty of 1 per 10 pounds, a generic “Difficult” task is 12, and so on). For simpler checks, a single d6 is rolled and compared to the skill or stat being tested.

Inventions are the “magic system” of the game. Scientific knowledge allows a character to build his or her knowledge of several different fields. Once a die is committed to that field in general research, though, it is used up, as it were, and can’t be used for another bit of knowledge. Once a character’s general research in a field is high enough to attempt to develop an actual invention (each invention is defined by the necessary knowledge in one or more fields), unused dice of scientific knowledge can be spent to attempt to invent, being used up in the process. The number of dice available is equal to the skill level in the branch of science in question, plus the character’s Intellect stat. Using up the dice for research or invention does not lower the character’s skill or stat levels, of course.

Combat is described in a tactical boardgame that can be ignored and abstracted by the Referee. Turns are 30 seconds long, and allow a character to make one or more actions. Normally, a character can make four actions per turn, but close combat allows actions equal to the character’s Close Combat skill or Agility, whichever is greater. Combat involves a third type of resolution: rolling a pool of dice based on the weapon used, skill, and other factors, and comparing each die to a target number and possibly to a defense pool rolled by the target. There are rules for NPC morale, explosions and demolition, and other aspects of adventuring in the Victorian age. The game also includes a version of the sky galleon combat rules from Sky Galleons of Mars. Animals also receive their own section in the combat rules, discussing the special considerations of large creatures, flying creatures, claws, fangs, tentacles, and so on.

There is a section discussing travel and exploration, important considerations in a Victorian game. Characters can get fever, get lost, or succumb to other hazards. There are rules for random encounters in proper old-school style, and a discussion of “invented encounters”, which are those pre-designed by the Referee. Weather, oddly, is tied to the random encounter system, but it’s a design decision that works well. There’s extensive discussion of space travel in the setting, including the problems with trying to land on the Moon or Mars’s moons. The rule book is finished off with an adventure (as I mention above) detailing the first expedition to the Moon and contacting the Selenites, detailed discussions of various aspects of Martian geography and society, and finally somewhat less detailed discussions of Venus.

I haven’t really gone into the details of the Martians, because I think that’s something that is best left for the players to discover in the game (and also because most of that information is fairly easily available online and off).

It’s an amazing achievement, and all the more so for being one of the foundation pillars of Steampunk (along with Morlock Night and The Difference Engine). I’m going to leave you with a bit of music in a mode that we call Sepiachord.