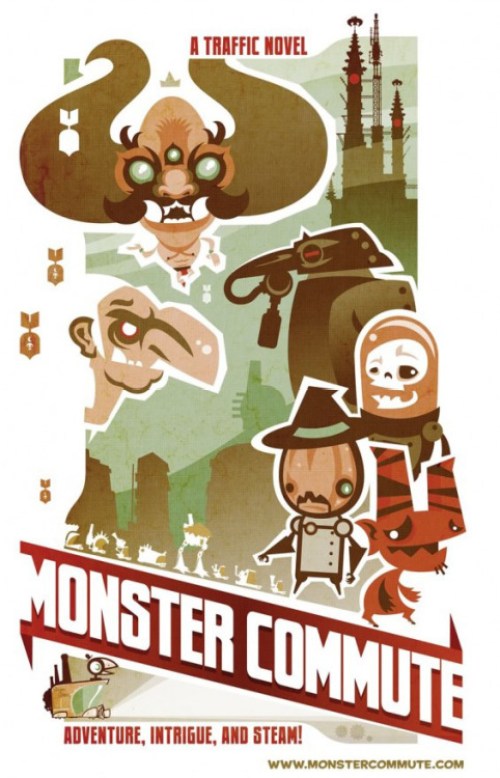 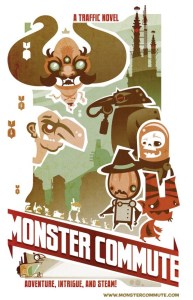 Daniel M. Davis is co-creator of the fabulous “Monster Commute” comic, which you can read free online!
http://www.monstercommute.com/

As it turns out the lovely and talented Mr Davis is also an old-school gamer and was kind enough to take a few minutes out of his insanely busy schedule to have a chat with us:

Victorian Adventure Enthusiast~ For folks who are unfamiliar with your comic Monster Commute how do you sum it up?

Daniel Davis: It’s an Orwellian adventure story about monsters living in a dieselpunk world (Monstru), trying to survive. The bad guys (The Authority) are 40 ft tall mechanical crows who hate the monsters, and generally use/abuse them.

The good guys are a bunch of friends trying to figure out how to not get stomped into grease puddles.

In tone it’s a little bit like the movies Brazil mixed with the Wizard of OZ, on a steampunk highway.

VAE~ What lead you to the creation of Monster Commute?

DD: Initially, it was Phoenix traffic.

My wife/partner Dawna were commuting 3+ hours a day in the PHX heat, and it was beginning to kill us.

I was trying to figure out how to bring together all of these ideas about monsters, steampunk, fascism, Halloween and modern living together, but it simply wasn’t working for me.

I was attempting to combine my passions into one story… but it wasn’t until I added my passion (hatred) for driving that it all came together in Monster Commute.

It sounds like a weird hybrid of a world, but I think that it works pretty well.

VAE~ You’ve described Monster Commute with terms like steampunk and monsterpunk. What does steampunk mean to you?

DD: I think that Steampunk is about an imaginary era/genre that is in reaction to our modern lives.

Instead of having these shiny plastic computers that mysteriously do everything in our modern lives, steampunk shows it all off with cogs, chains, and churning pistons. You can see and imagine what’s possible when you look at a steampunk device. A modern computer, not so much.

I think to survive in a modern era like ours, we need some escape from time to time. 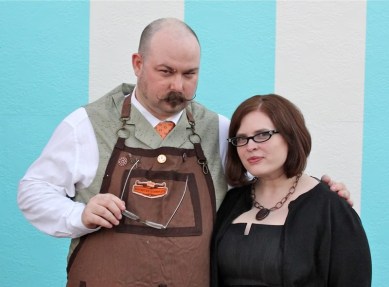 VAE~ How do you define “monsterpunk”?

DD: I’ve found that by calling Monster Commute “steampunk”, it sometimes confuses people. They’re maybe looking for Victorian dresses and well-suited gentlefolk on an adventure in the Alps against crazy German scientists.

Monstru doesn’t have people. Visually it’s cartoony in an urban 1918 kind of world. It’s got a dieselpunk vibe combined with steampunk. It’s more Americana than British. It’s about survival rather than tea.

It’s a pretty unique thing because I didn’t want to create a steampunk universe that could be confused with something else. With the blooming of the genre, I’m seeing some work that isn’t terribly distinct.

So, I invented “monsterpunk” to describe a story that is a subset of steampunk, but clearly different.

VAE~ Rumor has it that you’re working an a RolePlaying Game based on Monster Commute. How’s that going?

DD: It’s going great, though it’s a massive undertaking for one person. I’ve been working on it here and there for over a year now and there is a great deal of work left to do.

Wisely (at least from my perspective) I’m trying to keep it rules lite, which is letting me focus on the world, the adventure, and the fun. Mechanically it’s based on the FUDGE engine, which also makes it fairly easy to port over to other game systems too.

DD: Well, I got a Star Wars comic when I was 8 or so, which was cool. However, when I discovered kids playing Dungeons and Dragons in the school cafeteria in 1982, my mind was blown and I’ve not been the same ever since.

VAE~ What’s the earliest comic you can remember really having an effect on you?

DD: Well, I’m lame. I didn’t rediscover comics until the early 90’s when I started picking up Heavy Metal magazines every now and again.

When my buddy Shannon showed me Mike Mignola’s Dracula and later Alien Salvation, I was pretty hooked on Mike’s work. When Hellboy came out, I was enthralled and really taken in by his characters and world.

VAE~ How did you discover RPGs? What was the first one that you played?

DD: Like a lot of my geezer generation, it was 1st edition D&D. Played that for a few years before moving onto RuneQuest for the next decade or more.

DD: Me, I don’t love RPG rule sets as much as great settings. I’m interested in the worlds and characters of RPG games, and it’s why I buy them.

MouseGuard Is pretty splendid as far as modern games go. It’s just fun to read and doesn’t feel like a cruddy conversion. The production values are tops.

I’ve liked RPGs with strong world metaphors; DarkSun, PlaneScape, EarthDawn, ShadowRun… you know what the world-story is, which effects everything else.

VAE~ Do you get play any games much?

DD: Moving to Phoenix, I had to leave my 20 year gaming partners behind. I join up with them to game about once per year, which is a blast. I’m glad to see the campaign continue on without me, though I miss it (and them) a lot.

Gaming is all about the people you game with.

I’ve been so busy with the requirements of Steam Crow that I had to put gaming on the side for the first time in my life… However, it’s also the biggest reason that I’m creating the Monster Commute RPG; I have a business reason to game again!! It’s a must!

VAE~ You love monsters (who doesn’t!) what’s the first monster you remember drawing?

DD: I loved drawing giant Kaiju monsters that would belch out electricity, right off the bat. I remember drawing the Jaws poster a lot too. I’ve just always liked monsters more than people or animals for some reason.

DD: Oh, I don’t know. I don’t really enjoy drawing the same thing twice, so my favorite would have to be the “next monster” that I draw. If it’s a Halloween monster, all the better. 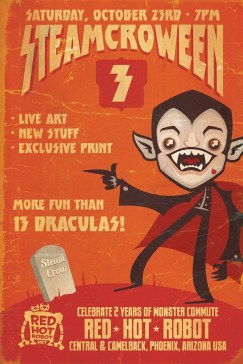 VAE~ What’s next for Monster Commute?

DD: Well, the story is going to continue to get darker and darker, which puts the main characters into some tougher situations. It should be interesting to see what the Authority and Toni Oni cook up next.

We’re also going to be doing our big annual Book Drive. Basically, we’re trying to raise money for the 2nd Monster Commute book through pre-order packages. We’ve got all kinds of cool offerings we’re putting together, from the “5 book set” to the “Steam Crow Slave for a Day” where I fly to your city and do your (legal) bidding for an entire day.

Our first book was 82% funded by our Patriot friends; I’m really hoping that we can drum up 100% support this time. The book drive runs from November 1st to January 31st.

VAE~ What’s next for Daniel Davis?

DD: I’m just trying to find ways to make what we do interesting. I’m hoping to do some weekly videos in 2011 and more convention appearances too.

VAE~ Any words of advice for the fine folks of the ætherverse?

DD: Keep being creative with steampunk. Make cool stuff, and share it with the community. The stronger the steampunk community, the less likely that crass commercialization will spoil all of this that we’ve been working on.

Be open minded, and concentrate on encouragement of steampunkrs rather than hard-core critique.

Creativity will keep this thing alive.

Thank you very much Daniel!

Hey if you’re Phoenix on Oct 23rd check out:
Steamcroween 3!