Welcome to the Victorian Gamer

Ezine for Role-playing in the Victorian Era
August 1999

Welcome to the first issue of Victorian Gamer. Each month, I will bring you a set of articles regular features the will provide information and insight into the Victorian Era. Most of the articles will be of general interest to the historian and Victorian buff, but some features, like the Game Seed will be of specific interest to role-players.

I will attempt to provide information that is of interest for not only the Historical role-player, but also those who like Scientific Romance in the style of Jules Verne, Steampunk a la The Difference Engine by William Gibson and Bruce Sterling, Victorian Horror, Military and Exploration as well.

If this first issue seems a little drab and short, it is because I am working on a self-imposed timeline to force myself to actually do this. As time goes on, I will spruce this up.

The initial issues will consist of articles written by me covering the research I have done into the Victorian period as well as material prepared for Victorian era role-playing. However, this is not exclusively a one-man project. I welcome contributions from other enthusiasts, be they gamers or historians. Just one comment, this ezine is an outgrowth of my hobby and is intended as a free resource. It is not my intent to profit from this and therefore I will not and cannot pay contributers for their material. I hope that this will not discourage anyone from sharing their ideas and information.

If you would like to contribute material, or just write, send email to me. Indicate if you do not want your letter published in the Letters to the Editor column.

Look for a short biography of an interesting Victorian person in next month’s issue.

The first game seed can be used in two types of campaigns. It could be used for a Victorian horror game or a realistic historical game.

Lord Pennington has gone mad and is now missing, leaving a trail of bodies. Those of his household who survived claim it is the curse of the mummy that Lord Pennington brought back with him from Egypt. They claim to have seen the mummy rise from its sarcophagus and have seen ghosts of Egyptions roaming around the room where it was stored. The mummy is moved to the Museum and now the curators and guards also claim to see ghosts and mummies.

It is up to the players to locate Lord Pennington and attempt to unravel the mystery of the mummy’s curse. In a horror campaign, it may be that there really is a mummy’s curse and the spirit of the pharoah has returned to punish those who dare disturb his remains. It is up to the players to determine how to exercise the spirit or appease it. They may need to travel to egypt and explore the tomb from which the sarcophagus was raised.

If you are not running a capaign with a supernatural campaign, there is a scientific explaination to the mystery. Email me if you are a GM and want to know the answer.

Recipe of the Month

This has to be my favorite recipe. If anyone tries it, let me know how it tastes.

Cut the rump steak into pieces and use it to line the bottom of a baking dish. Add salt and pepper to taste. Lay the pigeons on top of the steak and pour about .5 ounce of butter into each. Lay a slice of ham on top of each pigeon. Beat the egg yolks and pour over the pigeons, then add stock until the dish is half full. Place puff pastry around the sides then cover the dish with it. Brush the pastry with egg yolk and stick the pigeon feet into the top to decorate. Bake for 1.5 hours in a hot oven.

Sherlock Holmes is the best remembered of the Victorian detectives, the first to popular series of detective stories. But there were many who followed in Holmes footstep, particularly in the period when Holmes was believed dead. This book is a collection of short stories from various Victorian writers who also created worthy mysteries and detectives. The detectives in these stories come from all walks of life. There is G. K Chesterton’s Father Brown and Catherine Pirkis’ Loveday Brook, Lady Detective. This collection made for great reading and is an inexpensive addition to anyone’s collection (list price $2.00 – I got mine from Amazon). In additon to providing interesting settings for an adventure, it also portrays a variety of characters all well-suited for role-playing.

This is an actual steam carriage. It is a bad scan, but I will try to get a better one soon. 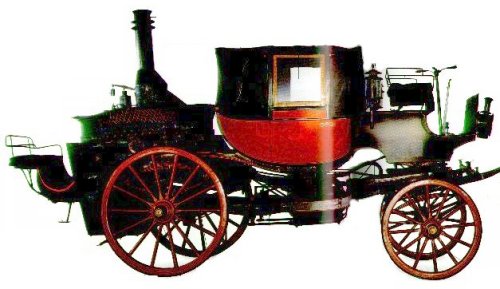 James M. Skipper, Jr. received a bachelor’s degree in History from the University of Houston. From there he joined the Army and became an intelligence officer serving three years in Germany. He is a veteran of Operations Desert Shield and Desert Storm, during which he was awarded the Bronze Star. Leaving the Army, he returned to Houston, where he spent three and a half years as a police officer. He is now a computer programmer/systems analyst working at Compaq’s headquarters. Jim hopes one day to decide what he wants to be when he grows up.

Jim developed an interest in the Victorian era early on when he began reading the Sherlock Holmes stories of Arthur Conan Doyle. As his studies into the era continued, he became fascinated by the feats of engineering and the marvelous inventions of the time (steam engines, photography, telegraphy, electricity and electric lights, the telephone, refrigeration…). He has also been playing and GMing Role-Playing Games since 1979. This is part of his effort to integrate his two interests.