Welcome to the Victorian Gamer

Ezine for Role-playing in the Victorian Era
September 1999

From the Editor’s Desktop

This issue is devoted to Steampunk. Steampunk is an exciting alternative history set in the Victorian era. Beyond that definition, there are a lot of options. In the lead article, I try to define Steampunk in its various incarnations as a literary and role-playing genre. The Biography this month is of Charles Babbage, the man who invented computing 100 years before its time. The Game Seed will be a Steampunk-style adventure and I review The Difference Engine by Willian Gibson and Bruce Sterling. This month’s Victorian Graphic features a selection of actual Victorian Inventions. I hope you enjoy it.

There are a lot of things out on the market that are called Steampunk. Morlock Night by K. W. Jeter, published in 1979, is perhaps the earliest novel that has been called steampunk. Since then, a list of novels, short stories, games and comic books have come out that claim to be or have been described as steampunk. Some have reclassified works by Jules Verne ans H. G. Wells as steampunk. The most recent addition to the collection is the movie, Wild Wild West with its steam-powered wheelchair and mechanical spider. What, if anything, do they have in common?

When defining steampunk, we cannot simply let the earliest book to be called steampunk set the standard, nor should we be ruled by those things which expressly call themselves steampunk, like Di Filippo’s The Steampunk Trilogy. Rather, we could/should in Socratic fashion, define what steampunk ought to be, then compare all that would be steampunk to that standard.

The word steampunk is derived from cyberpunk, so our definition of steampunk should tie-in to the definition of cyberpunk. Cyberpunk involves society’s response to an ever advancing technology that transforms life faster than culture can adjust to it in a time when information has more value than material goods. Cyberpunk is traditionally dystopian, presenting a dark view of the future in which technology creates more problems than it cures. A starting point for our definition of steampunk, then, should be a dystopian view of the role of technology in the nineteenth century, the Age of Steam.

With this definiton, one need not deviate from history. In the early part of the nineteenth century, many workers lost their jobs as machines replaced them in factories. The workers banded into mobs, led by a mythical Ned Ludd, to destroy the machines that were depriving them of their livelihood. These groups were violently repressed by the government. The telegraph transformed the Victorian world as greatly as the Internet is changing our world today 1.

But there is more to add. Cyberpunk is about technology that does not yet exist. The science used in cyberpunk stories is generally plausible. Steampunk is also about technology that never existed, but probably could. Steampunk, rather than a possible future, is an alternative past, postulating one or more changes, usually remarkable inventions that were never built, that would have had a significant impact on society. One such invention would have been Charles Babbage’s Analytical Engine. He developed all the principles of modern comuting 100 years before they could actually be implemented. He worked to build and analog computing device that could store and retrieve information and could be programmed. He was never able to build a working model. If an Analytical Engine could have been built, it is conceivable that a series of engines could have been connected by means of telegraph lines and form a network, a primitive Internet. Access to the increased spead and accuracy of these Engines, science and technology might have advanced at a much faster rate.

Steampunk is often outfitted with a variety of techological gadgets. Clockwork limbs, steam- powered automobiles, tanks and robots, aerial warships and an endless variety of modern-day inventions built using Steam Age technology. We should give credit where credit is due, though. The Victorians came up with electricity and the electric light, self-propelled vehicles of various sorts, refrigeration, telegraphy and and a host of other technologies that laid the foundation for twentieth-century technology. Steampunk takes the Victorian inventiveness and gives it a boost with better tools with which to invent. Many things presented in steampunk stories actually existed, but have been forgetten about as they were replaced by more efficient devices.

Let us then define steampunk as a genre of literature covering alternate histories of the Victorian era in which modern inventions are reinvented using Victorian technology and examining its effect on society. Dystopian varieties of cyberpunk tend to focus on the darker side of technology change, the impersonalization of the interactions, displacement of the work force and pollution. Lighter versions may see technology put to good use for the betterment of mankind, focusing on the creativity and imagination of Victorian inventors. Hard steampunk is that which uses potential technology that could have actually existed, the best example of which is The Difference Engine. Soft steampunk is that which is less concerned with technological rigor, such as Lord Kelvin’s Machine, in which the machine in question is a time machine and which also involves an electromagnetic device to be used to deflect a passing comet, or The Steampunk Trilogy that features a crossbred newt-human clone. An interesting twist on the steampunk idea is Neil Gaiman’s Mr. Hero, a comic book series about a piece of steampunk Victorian technology (an intelligent steam-powered robot) trying to cope with modern society.

There is another category of literature known as Scientific Romance. Romances, before the term became almost exclusively associated with historical love stories, designated all stories that heroic, adventurous or mysterious and took place in another time or place than that of the reader. Scientific Romances were stories like those of Jules Verne in which science and scientific speculation formed the basis of the story. Scientific Romance was the term used before the phrase “science fiction” came into popular use in the early 20th century. The role-playing game, Space: 1899 and stories like the John Carter of Mars books, stories involving Space Cannons, balloon trips to the moon and even books like Lord Kelvin’s Macine. Much of what otherwise might be called Scientific Romance gets wrapped up under the designation of steampunk.

Steampunk, like so many genres, is broad enough to allow great variety. As a world setting for gamers, it has the potential for great fun and appeals to players of all outlooks.

This section presents information about actual nineteenth century technology. The Victorians were incredibly inventive people as I hope to demonstrate here.

Plans for an Intercontinental Ballistic Cannon, encoded on a deck of punch cards, have been stolen. The cards are made of a remarkable new material, cellulose, which is more durable than paper but highly flammable. They were kept in a fire-proof case two-feet square and eight inches thick. There are only a few clues as to who stole these cards.

This seed is a combination Steampunk/Espionage concept, requiring the players to find the clues as to who stole the punch cards, then track them down and recover the IBC plans before they can be copied and used by an enemy state. It is a good opportunity for globe-hopping nineteenth century-style.

Recipe of the Month

Medallions of Beef with Morels

Start the sauce. Heat 1 tbsp butter in a saucepan on medium heat. Add the onion and cook for two minutes, stirring often. Add the wine and port and boil for 15 minutes, or until the suace is reduced to about 1 cup. Add the beef stock and the water the mushrooms soaked in and continue boiling for 25 minutes, or until the sauce has reduced to about 1/2 cup. Strain into another saucepan on low heat, then whisk in the remaining butter. Season with salt and pepper.

Season the medallions with salt and pepper. Heat oil and 1 tbsp butter in a skillet over medium-high. Cook the meat until it is evenly browned, but pink in the middle (7 to 10 minutes). Move the beef to a warm plate. Add the butter and mushrooms to the same skillet and cook until browned. Sprinkle parsley into the skillet and then add it all to the sauce.

Serve the medallions on a toast, potato cakes, or sliced roasted potatoes. This dish needs a good red wine or Bordeaux.

This novel is the one I consider to be most definitively steampunk. It is no wonder that a steampunk novel from two of the greatest names in cyberpunk should fit so closely to the cyberpunk mold of a world burdened by technology. The setting is in a Victorian London in an alternate timeline in which Babbage’s Analytical Engine was actually built. Given that one change, everything else in the book is scientifically plausible. The book presents an assortment of modern inventions recreated using Steam Age technology, such as arrays of multi-colored spindles, driven by small motors and directed by punch cards which can display a series of images. The spindles turn to present color to a viewer, illuminated by limelight, creating the image from pixels. Gibson and Sterling artfully remold Victorian society. The setting is believably Victorian, but transformed by the advance of technology. London suffers from terrible air and water pollution from the many industries that have grown up in or near the city.

The story involves three main characters and a mysterious deck of punch cards. The cards may contain a virus or an incredible program. We never really find out what they do, but someone wants them badly enough that it drives the characters through a complex plot of action, adventure and mystery. The plot carries us through all parts of this transformed Victorian London but leaves in a morass as impenetrable as the polluted Thames that runs through the city.

Overall, this is a great book for any fan of Steampunk and good reading for others interested in London as it might have been.

A steam-powered bicycle was actually built in the United States. It was the first thing that could be called a motorcycle. It may be the subject of a future article. 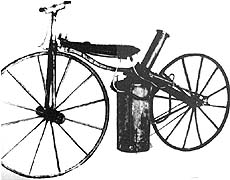 An engraving of a Steam Carriage circa 1884. 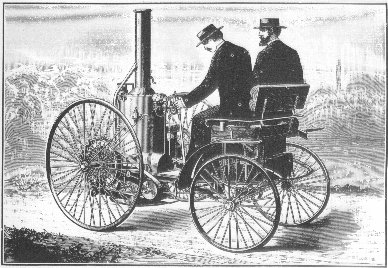 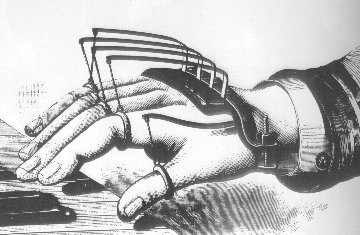 Letters to the Editor

Your opinions, ideas and information are welcome. Feel free to send a message or donate and article. Send it to the Editor.

See The Victorian Internet by Tom Standage (Walker & Company, NY, 1998) for an excellent study of the history of the telegraph and its parallels with the rise of the Internet.