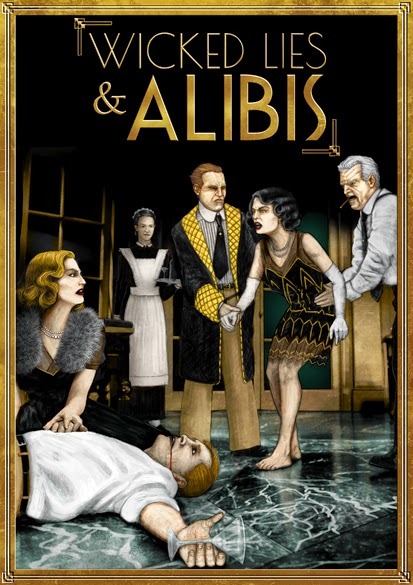 Innovative character creation and structured opening scenes support players to generate a cast of complex characters who all have a motive to kill the victim. The remainder of the game is played as a series of flashback rounds where each player, in turn, assumes a degree of narrative control to frame a flashback which incriminates another character.

The Game Master has a dual role, both as facilitator of scenes, and as the Great Detective, a Non-Player Character summoned to solve the murder, who summarizes the evidence revealed by the characters, and reveals the motives of the characters one-by-one before finally disclosing the identity of the murderer.

Wicked Lies & Alibis includes all the cards needed to play, detailed facilitation notes to support the GM in running the game, details about the era of Art Deco to add to the realism of the setting, and nine murder mysteries along with suggestions for the Great Detectives who might solve the case.

Wicked Lies & Alibis is available from DriveThruRPG and RPGNow in PDF and print. A high-quality printed card deck is also available, bundled with the PDF.

Imaginary Empire is a member of the Game Publishers Guild, a strategic alliance of publishers committed to driving excellence in their products through cooperation and collaboration.”