You are here: Home › Articles › Wonderland via JAGS~

“JAGS Wonderland and the Book of Knots are JAGS modern-day surreal horror worldbook setting based on the work of Lewis Carroll. Enter a world of wonder and madness.” 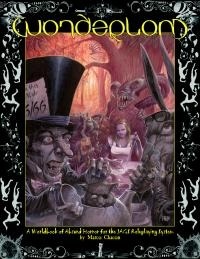 “On a cool, wet July 4th (a day the children who heard the story recalled as bright and sunny) an Oxford mathematician (who, according to his diaries suffered from strange visions) created the first of two works: each with exactly 12 chapters. They are encoded survival guides meant as warnings. They are an old and new testament for a coming age of insanity.

The number 12 is not arbitrary (months in the year? Hours in the day?): in the second book (Through the Looking Glass and What Alice Found There) the 10th and 11th chapters have only 59 and 38 words respectively. What do you think that means?

It means Wonderland is coming.

The narrative is disguised as a children’s story: we are assured nobody is killed. The book is an encrypted warning: we are told that nobody is a person who is very, very hard to see. If nobody is alive then there’s also a stack of bloody severed heads in the alcoves of the Queen of Heart’s castle.

Disney may have understood the message but their movie has hidden things even deeper. There is no such book as Alice in Wonderland (the name most adults know both works by). There were always clues in the artwork: the Knave of Clubs is in the court room illustration, the Knave of Hearts is in the poem as Lewis Carroll was formally trained in symbolic logic none of this is coincidence. The fractures are growing wider. Wonderland is waiting on the other side—waiting to get in.”

You can download TWO versions of the JAGS universal RPG system, and both Wonderland and the Book of Knots FOR FREE on their website: http://www.jagsrpg.org/index.html