A steam locomotive derailed two miles outside of Idaho Springs late yesterday. No injuries have been reported but the engineer is missing.

One of seven trains daily, Engine #9 was on its return trip from Idaho Springs to Denver. Passengers report the train was travelling faster than normal. The engine, coal car, and a cargo car all left the tracks and toppled down the grade along the rail bed. The two passenger cars and caboose decoupled and remained upright on the tracks.

After the crew and passengers disembarked and sorted through the chaos, Jim Wheeler was discovered missing. Wheeler had been the engineer of #9 for the last two years. Considered a solid employee, Jim is a dedicated employee having never missed a day of work.

After he is discovered missing, the able bodied passengers and rest of the train crew search the immediate area. Jim’s cap is found near the engine. It is stained with blood along the bill and right side. No other signs of him are found. As evening arrives, another train is brought in to transport the passengers back to Denver. 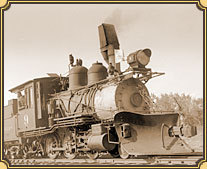 The search is halted due to darkness but the local railroad manager, Christopher Carter offers a reward of $50 for aid in finding Jim. Unbeknown to Carter, Wheeler has racked up a significant gambling debt he was due to pay upon his return to Denver. The prior day, he hid a horse and supplies about three quarters of a mile west of the derailment site. He’d planned to jump from the train and disappear from the area.

Unfortunately, as he was exiting the engine, he inadvertently knocked the throttles forward leading to the derailment as the train rounded a sharp turn at high speed. His plan never involved derailing the train or injuring anyone. He assumed the fireman would notice his absence and stop the train but he’d be well on his way. Unfortunately, the fireman was moving coal from the car into the engine hopper and didn’t notice in time.

The player characters should be passengers on the train and immediately become involved in the drama of the wreck and search for Wheeler. One or more of them may have met him in passing. Alternatively, they could be hired by the gambler, Slim Amendola, to track him down and recoup the $900 of debt he owes.

Wheeler is riding hard to the west toward Frisco. He avoids towns and only spends a few hours camped the first night. He plans to turn south at Frisco and make is way south through South Park toward New Mexico.

Although Jim is armed with a revolver and rifle, he will avoid confrontation. He will surrender to anyone rather than fighting. If he can slip away from pursuers, he will.