You are here: Home › Articles › New to the VAE Library~ Anima Prime 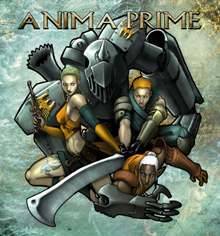 Anima Prime is a RPG by Christian Griffen, he sums it up as such:

“Anima Prime is a fast-paced, spontaneous roleplaying game inspired by the Final Fantasy series of video games as well as Avatar: The Last Airbender and other animated shows and movies.

The game combines narrative freedom in character scenes and combat maneuvers with elemental powers, Soulbound Weapons, and the summoning of Eidolons to allow you to create your own stories and action scenes rivaling those usually seen in video game cut scenes and anime battles. A flexible goal system lets you infuse any fight with meaningful story decision points and unlimited tactical options.”

OH YES: by the way you can download an artless version of the game FOR FREE!!! here: http://www.animaprimerpg.com/main/docs/Anima_Prime_CC_04-07-2011.pdf

Much love & respect to my buddy Gray Pawn for the hook-up!