You are here: Home › Articles › Six-Guns and Strange Shooters~

Special mention is given to Deadlands.

What is it about the American West that continues to inspire? There’s the romanticized notion of expansion, the simplistic morality of white hats and black hats, of cowboys vs. Indians. And there’s the post-modern Western that does not gloss over the era’s exploitation and violence; all the birth pains of a new nation. Then there is the Weird West, a genre-hopping category that uses a lot of the Western window-dressing—gunslingers, railroads, Pinkertons—and mashes them up with cosmic horror, alternate histories of American icons, and a vast landscape of cruel promise and harsh awe. To celebrate the release of a new batch of novels set in the Weird West world of the RPG Deadlands, beginning with Jonathan Maberry’s Deadlands: Ghostwalkers, it’s time to saddle up for a ride into a booming frontier of creepy thrill.

Our soundtrack through the badlands surely must contain the music of Nick Cave and the Bad Seeds. The obvious choice of song is the go-to spooky tune of “Red Right Hand,” featured in The X-Files, Scream, BBC’s Peaky Blinders, and the trailers for too many boring horror movies. But dig even an inch deeper into Australian rocker Cave’s discography and find stories of Elvis Presley’s dead twin brother (“Tupelo,”) a vengeful woman who “measures .32-.44-.38” picking off drunken miners (“Crow Jane”) and a murderer marked as Satan’s own (“Up Jumped the Devil.”) Cave’s songs often take the form of full narratives and few beat the complete fury of “Papa Won’t Leave You, Henry,” from 1992’s Henry’s Dream with it’s jangling Ennio Morricone-inspired guitars, drought-stricken ghost towns, shrieking reverends, brothel massacres, and apocalyptic plagues.

Forget the terrible movie. (You know Josh Brolin wishes he could.) The original 1977 DC comic is considered one of the first popular representations of the Weird West. The bounty hunter marked by a demon’s brand seeks out the West’s worst and also, sometimes, less earthly quarry. He also sometimes time travels and gets into a gun-fight with a T-Rex. Jonah Hex‘s best and creepiest run was written by east Texan horror master Joe R. Lansdale and come highly recommended.

The Etched City by K.J. Bishop

Gun-slinging cavalier Gwynn is chased across the desert of Copper Country by the winning soldiers of a vicious war. With him is Raule, a medic, who follows Gywnn to the decadent, pseudo-Victorian city of Ashamoil, teeming with canals, crocodiles, and succubi. Reviews compared The Etched City favorably to China Miéville’s Iron Council, which released around the same time, and it was nominated for the World Fantasy Award for Best Novel. Australian author Bishop’s fiction is perfect for fans of Jeff VanderMeer, Margo Lanagan, and M. John Harrison’s Viriconium novels.

What could elevate the legends around Tombstone to the truly mythic? World fantasy Award-winning author Bull imagines a West where Wyatt Earp and Doc Holiday were sorcerers jockeying for a land grab in a West run over with black magic and shaky alliances. While this isn’t strictly Weird West, it does have some macabre moments and, hell, anything written by Emma Bull is worth a reader’s attention.

Are you an agent of The Gun or The Line? The frontier that psychologist Liv Alverhuysen travels to doesn’t get much more chaotic than this superb pageturner of Western icons, primordial magic, and steam-powered manifest destiny. The Great War between magic and industry continues with inventor Harry Ransom in an even more tightly-paced follow-up novel. The Rim may be half-formed, but Gilman’s Western world world is fully realized, down to the tiniest mote of dust kicked up by spur-adorned boots.

The Dark Tower: The Gunslinger by Stephen King

“The man in black fled across the desert and the gunslinger followed.” With that image the most popular dark fantasy of our time begins. While the series moves beyond the parallel Western dimension, we’d be remiss to leave this off the list. Also, there are atomic slugs. That should count for something.

The Great Quake of 1868 has shattered California into a labyrinth of sea-flooded caverns, and a mysterious substance called “ghost rock” fuels exotic steampunk inventions as well as plenty of bloodshed and flying bullets. In Ghostwalkers, a gun-for-hire, literally haunted by his bloody past, comes to the struggling town of Paradise Falls, where he becomes embroiled in a deadly conflict between the besieged community and a diabolically brilliant alchemist who is building terrible new weapons of mass destruction… and an army of the living dead!

The Six-Gun Tarot and The Shotgun Arcana by R.S. Belcher

Golgotha, Nevada, home to a failing silver mine, is digging up more than precious metal deep within the earth. A fugitive, an indestructible sheriff, and his clever deputy wrestle with old evils, occult secrets, and Chinese and Native American lore in this rollicking new series.

e last of the author’s Bas-Lag novels focuses on a revolution on a railroad. Cacti people abound, and so do corrupt industrialists, golem-conjuring natives threatened by the tracks’ expansion, and a murderspirit threatening to destroy the city of New Crobuzon. Iron Council, the perpetual train, is a socialist society on wheels and revolution leader Judah Low is one of Miéville’s best characters. I’ve come to appreciate this book even more on a second reading and the ending is a killer. While this isn’t our West, it’s the idea of the West and the tone of Iron Council that impresses.

Is this a Western? Is this literary? Is this a horror story? Why can’t one of the foremost novels of early Americans at their ugliest be a bit of everything? Like many of McCarthy’s works, there is a dark force propelling the action forward. Is it Fate? Is it Evil? Look to the hulking, bald creature leading a pack of scalp-hunters. The Judge is preternatural in his malevolence, less a man than a monster. Less of our world than straight from Hell. Blood Meridian is full of angry, beautiful prose and eyeball kicks of strangeness, like storms so violent, they impale birds on the spines of a cactus. Whatever this novel is, it’s mesmerizing.

Similar to Bull’s Territory, this fairytale of the half-Navajo daughter of industrialist George Hearst is more of an alternate history than a Weird piece… until the origin of the Evil Queen’s magic mirror is revealed. While Valente’s West is a land of Native American magic, coyote spirits, and the mystery of wide open spaces, the East hold forests choked with ancient dark magic that reaches up from the earth in twisting black tentacles. Tentacles are never attached to anything wholesome in fiction.

Honorable mentions: The Preacher series by Garth Ennis; Vermillion by Molly Tanzer; The Hawkline Monster by Richard Brautigan; High Cotton by Joe R. Lansdale; and select stories from The Beautiful Thing That Awaits Us All by Laird Barron. 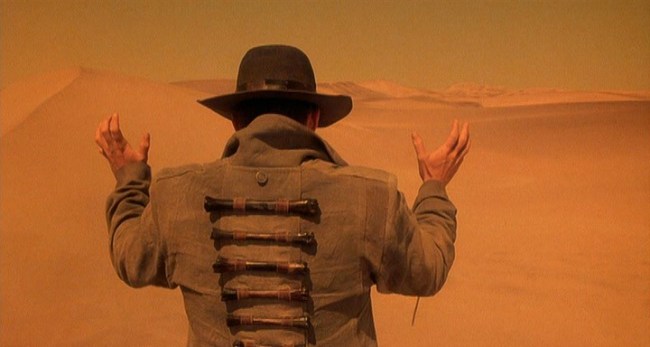 Another worthy entry into Western lore by a foreigner. Like Sergio Leone before him, South African director Richard Stanley captures the swirling sands and sun-bleached landscapes of the desert with perfect majesty. Only this time, the gunslinger is actually the embodiment of an ancient demon who beds and bleeds his lonely victims in this stylish thriller. Composer Simon Boswell provides a moody, Morricone-inspired score. Dust Devil is available now on Netflix streaming and is worth you time for performances from the devilishly handsome Robert John Burke and South African character actor Zakes Mokae as the skeptical police detective tracking down a monster.

Honorable mentions: A snowy military outpost in the Sierra Nevada mountains is home to wendigos/cannibals in the black comedy Ravenous (1999), and The Burrowers (2008) sees an incomprehensible race of creatures being displaced by European settlers to horrific and gory effect in this creepy, pointed commentary on Western expansion.

Set in 1879, Deadlands is cowboys vs. zombies vs. giant scarabs vs. evil hucksters selling potions way worse than a little snake oil. The backdrop of this world is much like our own, until an event in 1883 involving a Sioux shaman trying to oust European settlers opened up a door to another dimension whose inhabitants feed on fear. This tabletop RPG kicks up the Western fun with character creation tools that include decks of cards and poker chips in addition to more traditional dice. 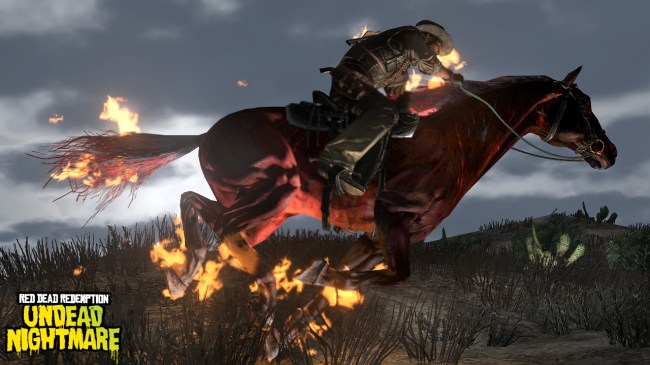 Honorable mention: Red Dead Redemption‘s Undead Nightmare DLC sees Rockstar’s gorgeous Western territory overrun by zombies, chupacabra, sasquatches and the Four Horses of the Apocalypse. And a unicorn that trails rainbows. And a costume nod to Ash in Army of Darkness. This mini-game is a full-fledged makeover for the award-winning game, just as fun—and definitely funnier in tone—than the original property.

Theresa DeLucci is a regular contributor to Tor.com, covering book reviews, gaming and TV, including Game of Thrones. She’s also discussed entertainment for Boing Boing and Wired.com’s Geek’s Guide to the Galaxy. A student of the 2008 Clarion West Writers’ workshop, her short fiction has appeared in ChiZine. Follow her on Twitter.