Ripped from history – Soapy Smith was a legendary con man. His reign ran from Texas through Colorado and onto Alaska. 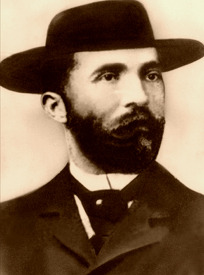 The Prize Package Soap Sell
“The con began with Smith setting up a keiser (a suitcase on a tri-pod stand) on a busy street corner. In the suitcase would be piles of ordinary soap wrapped in plain paper. As curious passers-by stopped to look, he would begin to wrap some of the soap bars with paper money, ranging from one dollar up to a hundred. Rewrapping in the plain paper, he would mix them in with the others and sell the soap for $1-5 per bar. In the “crowd” Soapy would always have a “shill,” quick to buy a bar of soap, happily opening it to find a $100 bill. The crowd was then anxious to buy their own, which, of course, held nothing but a 5¢ cake of soap. For the next two decades, Smith continued the swindle with great success.” (The Prize Package Soap Racket)

Soapy is setup outside the popular Tivoli Saloon and Gambling Hall just as a train has arrived at nearby Union Station. He has agreed to pay to the owners of the Saloon a share of the profits. As the traffic from the train begins to arrive near the Tivoli, Soapy whips into action working in tandem with a pair of shills in the crowd. The first seemingly astonished customer walks away with $100. The second is nearly as happy with $20 for his $1 investment.

Beyond his short cons, Soapy is also running a series of long cons involving fake railroad stock and a false lottery. Soapy is careful not to swindle locals, which could lead to trouble. Instead, he continuously takes advantage of the open gambling policy of Denver. His network of associates and friends includes most of the local saloon owners, a handful of city officials, and the local sheriff.

The PC’s are approached by an Chicago based cattle merchant, Landry Thomas. Landry explains his wife and daughter were swindled by Soapy and he’d like to recover the money. The law is not in his favor but still he wants to pressure Smith.

If the PCs agree to the task, they can find Soapy playing cards in the Tivoli Saloon. He will engage the characters in conversation trying to deftly determine how intent they are on recouping the losses. Smith is more interested in earning more money than retaining the winnings from two individuals.

He will attempt to bribe the PC’s with matching pay from Thomas. If that fails, he will bribe them and even offer them lucrative work as shills and gamblers. As a last resort, he will offer to return the women’s losses rather than be drawn into a violent dispute.

If Smith learns that Thomas is a cattle merchant, he will dispatch some of his crew to sell him a futures bid on Colorado Cattle. Smith will not be directly involved and has no intention of delivering the cattle.

Guest Appearance: Bat Masterson – Worked as a card dealer in the Tivoli.

Read more about Soapy at Alias Soapy Smith or Legends of America.