You are here: Home › Adventures › The Petrified Man – A “Soapy” Smith Adventure for Boot Hill 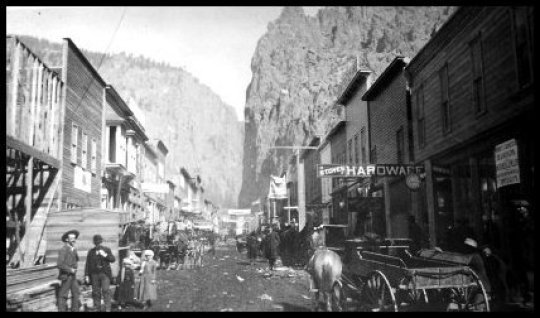 The petrified man discovered near Creede, Colo., April 9, 1892, is now on exhibition. A marvel of wonders; every muscle, the pores of the skin, the finger nails and toe nails all complete, in a perfect state of preservation, as natural as life. 10¢ Admission (SoapySmith.net)

Jefferson Randolph “Soapy” Smith has already been used as the basis of a previous con based adventure. Smith was legendary in his ability earn money and one of his stranger baits was the introduction of “McGinty” the petrified man during his time in Creede, Colorado (and later in Denver). According to Smith, McGinty was purchased from miners in the area who unearthed him while working a claim.

The McGinty man is designed to draw visitors into The Orleans Club in Creede. While waiting in line, every visitor is encouraged to engage in games of chance, all favoring the house. The games include shell games and 3-Card Monte.

This short adventure is a sidebar to any ongoing campaign idea allowing for open-sandbox style running. Perhaps the characters are drinking heavily and want to see the petrified man. Along the way, they gamble more than they should and take heavy losses.

Alternatively, they may be trying to meet Soapy for another reason. He’s preparing to move McGinty to Denver and needs some help. Transporting an artifact, even one of questionable origins, is going to be a challenge over the rough roadways.

The McGinty story is a good story as added flavor to add to any adventure featuring Creede or another fictional locale. During its reign as an exhibit, the petrified man will certainly draw attention.